Experiment of one: AIP

On Saturday, I started the autoimmune protocol (AIP) diet.  So far, my progress has followed the usual steps: 1) start diet, 2) post food pic on Insta, 3) talk about diet with friends.  The next step is clearly: 4) blog about diet.

Seriously, though, a couple friends have asked me to blog about the diet occasionally over the next month, because they're interested to hear about someone's -- particularly, an ultrarunner's -- experience.  I figured that's a good idea, in case it could be useful to someone else.  Of course, there's the caveat that we are each an experiment of one; what works for me might not necessarily work for you, and vice versa.  Here's my story so far:

My reasons for starting AIP
For a year or two, I lived a fairly no-grain, no-added-sugar lifestyle.  I was happy eating the same foods (scrambled eggs, smoothies, carrots and hummus) day in and day out, for multiple meals a day.  Then Joe and I started dating, and things became more complicated -- in a good way.  I wasn't going to serve him a smoothie for dinner when he came over to my place, and I surely wasn't going to turn down whatever he served me at his.  And if we took the girls out for ice cream and everyone else was getting one, it would feel antisocial to refuse . . . It was fun, yet from there it was a shockingly quick spiral into eating 1,500 calorie meals at Carl's Jr. on a quasi-regular basis.

Sometime in the midst of this, my doctor went over some lab results with me, and informed me that one marker, associated with adrenal levels, was outside of the normal range, and he recommended that I try AIP.  Naturally, I blew him off.  I'd heard of the protocol from my strength and conditioning coach, who does it occasionally for a month at a time, and it sounded awful.  No grain, no dairy, no hummus?  No thanks.

However, ever since the Lone Star 100 in February, I have felt like I'm eating junk all the time.  I gained about 5 pounds, and I was unhappy with myself.  Some of my runs have felt terrible, and sometimes it's hard even climbing the stairs up to my apartment.  It's difficult to pinpoint the causes of those last two things: I know I've been racing ultras too frequently; I've suffered from iron-deficiency anemia in the past; I donate blood regularly.  All of those things could be factors in my fatigue.  But I feel like I'm doing what I can about the iron, taking a supplement every day.  So hitting the "reset" button on my diet seemed like the next step in getting healthier and hopefully feeling better.  Of course, I could have chosen a diet that involved moderation, but that's actually harder for me than a strict elimination protocol; for better or worse, I'm kind of an "all or nothing" person.  So for the next month, I'm all in.

Learning curve
Going to H-E-B the night before I started the protocol, I wasn't sure what to get.  Fortunately, I had these little cheat sheets to guide me: 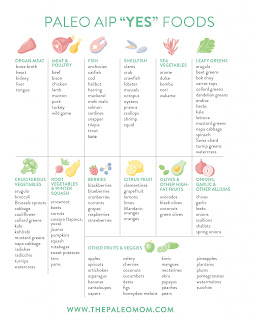 I ended up getting lots of vegetables, some frozen grilled chicken strips, avocados, and fruit.  It's been interesting trying new combinations of foods.  I've found I hate plain avocado, but I really like it combined with cilantro, cumin, and salt, served on cucumber slices.  I have a bland enough palate that chicken and broccoli tastes fine.  And I've just realized that coconut milk isn't prohibited, so I'm thinking about reverting back to my old smoothie ways.

I have had a couple accidental cheat moments already -- eating guacamole that had some ground-up bell pepper in it (oops), using seasoning that had paprika and sugar (oops) -- but those seem like small errors in the big picture.  I'm really trying to be faithful to the protocol, so that it can give me useful information about what foods make me feel better, and which might have a detrimental effect.

Observations so far
Today is only day 4 of the protocol.  Here are some observations I've made over the last few days, with the caveat that I'm not necessarily suggesting causation.


So that's my story so far.  I'll report back with an update in a couple weeks.  In the meantime, if you have any good AIP recipe ideas, send them my way!
Posted by Julie Schmal at 10:20 AM