We came to New Zealand as our “engagement trip” (i.e., the trip we paid for using the money we saved by not getting an engagement ring), and we decided to do a race as long as we were here. Joe had never heard of the Tarawera Ultra before, but I had, and was eager to check it out. 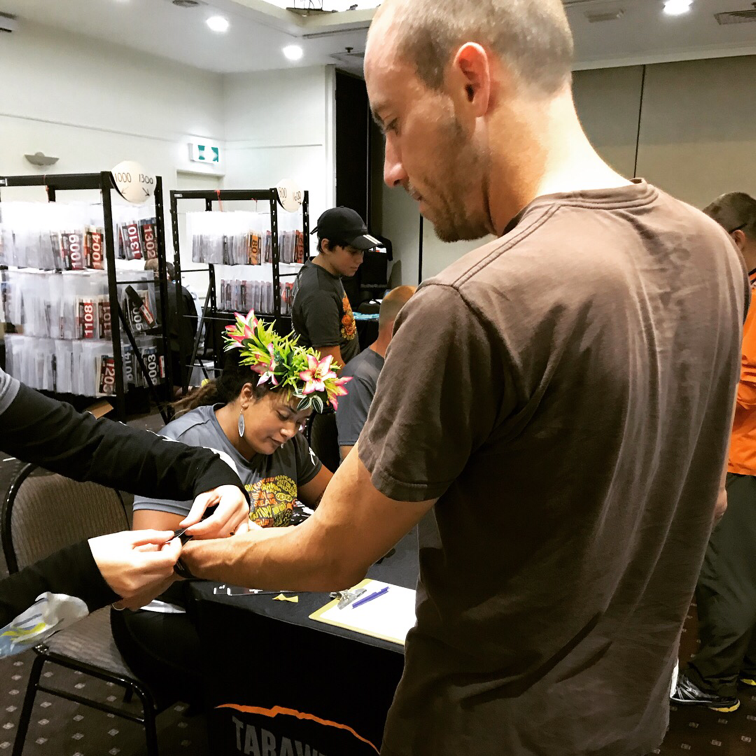 Joe at packet pick-up, before his weigh-in
We had both registered for the 102k distance, but as the race approached, I was really nervous about doing it. As Katie Grossman put it so well in her recent article (I don’t know how to insert a link using this app, so here it is: https://www.trailsisters.net/2018/01/18/the-choice/), I’m trying lately to make my body a friendly, hospitable environment in case someone else would like to take up residence there for nine months. Running 102k in the pouring rain, in the mountains, with 10,000ft vertical gain, didn’t seem conducive to that.
The day before the race, as I stressed about it and Joe and I talked about it, he encouraged me to try to separate it into two decisions: decide first whether you don’t want to do the race because it’s going to be a miserable suffer-fest in the rain, separately from whether you don’t want to do it because it might impact conceiving this month. But I couldn’t separate the two; it was BECAUSE it was going to be a strenuous muddy suffer-fest, in the chilly rain all day, that I was especially worried. I decided to ask at the expo whether I could drop down to the 62k, and then I’d feel better about it. Happily, they did let me, no hassle at all, and I felt so relieved.
Come race day, however, it was impressed upon me how prideful and silly it was to think that running 62k (40 miles, according to my Garmin) with about 6,000ft of vertical gain, in the rain and slippery mud (AHH! Bighorn flashbacks!) would be comfortable. I had thought, going into it, that I’d just keep a conversational pace, and manage my food and drink intake, and my body wouldn’t be too stressed. But it seems I’m just not able to keep control well enough in an ultra. Over the course of the race, I ran out of calories between aid stations that were 10 miles apart, became light-headed, got my heart rate up really high on the long climbs where I kept sliding backwards in the mud, and just generally felt exhausted. I also suffered through anterior tib pain whenever I dorsiflexed or plantar-flexed, as well as a sting or bite from some exotic New Zealand insect that stung like a mother****** for a few hours—but I can deal with those things; it’s the general exhaustion and stress on my body that caused me even more stress during the race, as I thought about the consequences for our chances of conception this month.
Despite this psychological stress, however, the race certainly had its bright spots. It was really well-organized. Joe and I easily stepped into a bus that took us to his starting line, and I was able to cheer for him when he started. Then I easily stepped into another his that took me to my starting line.  (Both races were point-to-point and ended back in Rotorua.) I also got to see an impressive Maori war dance before my start. 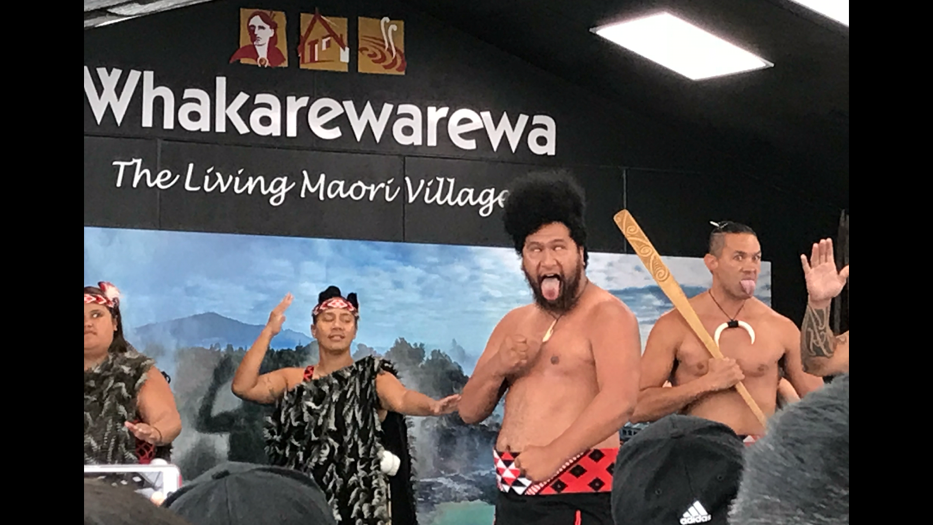 Maori war dance we saw the day before the race
Passing by the roaring Tarawera Falls and several beautiful lakes were other highlights, as were the enormous redwood trees and lush ferns all around. The scenery throughout the race was spectacular.  (The only drawback to the nice scenery was in the last 3-4 kilometers, when we ran through beautiful thermal areas, with smoke billowing from the ground. The smell seemed beyond the usual sulfuric nastiness you’d expect near a geyser. It smelled like sulfur mixed with rotten garbage and diarrhea. Maybe it was just because I was already a bit queasy, but I had to stop running and plug my nose. I felt like I could barely breathe and my gag reflex started up. The finish line couldn’t come soon enough!) The scenic (and smelly) thermal areas in Rotorua.
I had been looking forward to observing any differences between the races I’ve done in the U.S. and this, my first international race. One observation was that there was very little in the way of portable food at the aid stations. There were no gels or chews or anything packaged, and the sandwiches and brownies they had got soggy in between aid stations. (The brownies were delicious, though.) Joe accidentally took a Marmite sandwich at one aid station — a costly mistake. 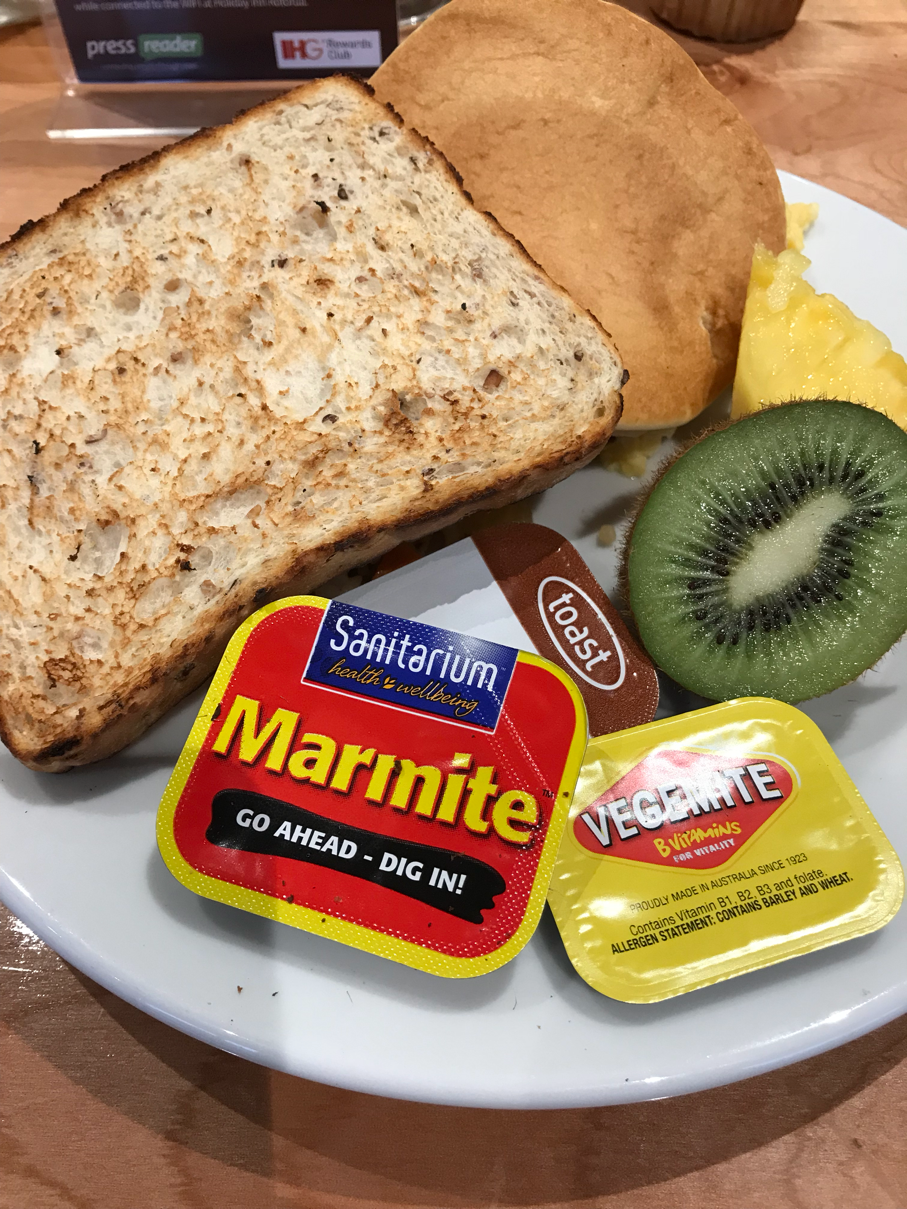 (I tried some at breakfast the other day. Blech!)
I also got to see Joe twice—because the 62k cuts off a bit of a loop, Joe was able to pass me twice. He looked so good. Honestly, the first time he passed me, I was a little upset that he didn’t have the decency to look as miserable as I felt. He seemed quite chipper, in fact. By the time I saw him the second time, his attitude was slightly more appropriate for a difficult 102k. Still, despite running 40k (24 or so miles) more than me, with only an hour head start, he still beat me to the finish line.
Joe ran me in to the finish, and I’m sure we made a funny pair—me with my limp from anterior tib pain, and him barely recovered from finishing his race strong. They announced something about each person as they finished, and ours was that we were on our honeymoon—or runningmoon, as they put it. Both race directors gave us a big hug. It was a great finish atmosphere.  We walked over to a bench away from the crowds and shared our race stories with one another. I love that we can relate so well to what the other experienced, since we’re both out there in the same terrain and conditions.
This experience really changed my mind, from thinking that I can keep running 50ks while we’re trying to conceive, to realizing that I want to be more in control of what I’m experiencing, and I want to minimize the stress to my body at this time. So Tarawera will be the last race I do for a while.  After we’re done trying, or after we have kids, then, of course, I’ll go back to destroying my body with this silly sport.  (Habanero, anyone?)
Posted by Julie Schmal at 10:10 AM No comments: