Usually I have too short of an attention span to write a "real" race report.  I sit down at my computer with the best of intentions, but then I end up writing a top ten list or bullet points instead.  Tonight, since I'm looking to kill time while alternating ice dunking and doing the "legs up the wall" recovery yoga pose, I'll attempt to actually write out what I recall from yesterday's Brazos Bend 50 miler.

After the usual spotty quality of sleep the night before the race, Amanda and I drove to the state park and got there in plenty of time to set up our things on Amanda's tarp.  (She is so smart to think of bringing a tarp, to keep the ants off her things, and so generous to share it!)  I had brought Tailwind pre-mixed into water bottles, but I miscalculated, thinking that I could drop off my drop bags the morning of the race.  Turns out that wasn't the case, so as we teachers say, I had to "adjust and modify."  Not a big deal, as the aid stations were very well stocked.

Amanda and I took one last trip to the bathroom, and by the time we came out, Rob, the RD, was already counting down for the race start.  We hopped into the chute and took off.  It was only dark for about half an hour.  My favorite thing about the course was the width of the path, making it easy to pass and be passed.  The usual "conga line," which is my least favorite part of trail races, was totally nonexistent.

Once the sun rose, I started looking left and right for alligators.  I had joked with people that my goal was to see an alligator, but it was actually the truth.  As a native Minnesotan, alligators are a very exotic concept, and I felt like seeing just one would make my day.  In the first stretch of the course, there were swampy/wet areas on both sides of the trail.  At first, I was just seeing logs that were alligator-shaped, and then I started to notice what I was 81% sure were alligator heads.  But, as my family would say, these sightings were "unconfirmed."  Then, all of a sudden, I saw a huge alligator.  Over the course of the next nine hours, I'm pretty sure I saw a hundred of them.  Big ones, baby ones (so cute!), all of them looking very content as we ran past. 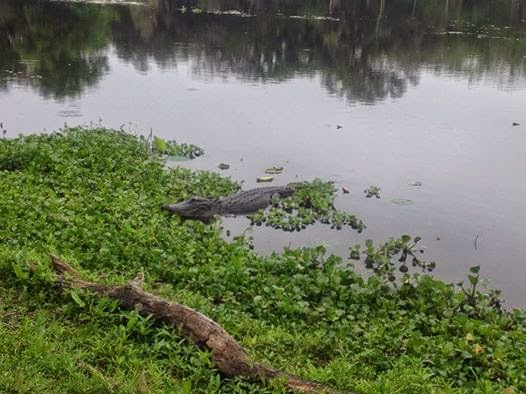 The race consisted of three loops.  The first loop was manageable.  The course was flat and fast, as advertised, and I ran pretty much every step.  I drank the only bottle of Tailwind I would drink that day, and supplemented it with VFuels (some that I brought, and some generously provided by the aid stations).  I finished the Rosary I had begun when I was having trouble getting back to sleep at 3:00am, and said one more, plus the Divine Mercy chaplet.  Then I put in one earbud and listed to music on my Shuffle.  After living in San Antonio for a year and a half, I was astounded by how green everything was in this part of the state.  And I haven't seen that much water since I left Minnesota.  I thought that the area had similar characteristics to parts of Minnesota -- except for the threat of alligators and water moccasins, plus the 84 degree weather in the month of April.

When I hit up the start/finish aid station before beginning loop two, I was surprised to see the RD actually working there, helping runners with whatever they needed.  He was so kind to call me by name, asking what I needed.  I took a cup of soda (people get confused if you call it "pop" here) and a refill in my water bottle.  By this point, I had stopped using the bottle in my SJ vest for water, and I had started asking A/S volunteers to fill it with soda and ice.  It got me some hydration, as well as some calories.  And I tried to take a VFuel every so often.  I always start with the best of intentions, to really monitor my calorie intake and take a sip of this or a shot of that every 15 or 30 minutes or whatever, but I never end up sticking to it for the entire race.  This race was no exception.  But anytime I felt myself lagging, I'd force feed myself until I felt better.  I feel like that's not something I would have done even six months ago (note my Cactus Rose experience as a prime example), so at least I'm learning, if slowly.

During loop two, the heat and humidity really started getting to me.  I took up a new goal of running 10 minutes and then walking for two minutes.  It worked pretty well for me, and gave me a reason to push myself and something to look forward to.  I stopped during this loop to pee -- in an actual bathroom, conveniently located right on the course.  There were actually multiple bathrooms on the course, so I doubt many runners had to use the brush -- which is a very good thing, because there were tons of hikers and tourists all over the place (not to mention the threat of gators and venomous snakes).  Don't get me wrong, there were some stretches where I was by myself, but they were rare.  Usually I could see runners ahead of me, and sometimes runners came past going the opposite direction, because the course had a couple "lollipop" areas.  Although I didn't think I'd like this aspect of the course, since one of the things I love about trail racing is being out in the woods by myself, it was really fun and motivating to see friends out there on the trail.  It also seemed like there was a tour bus stopping to visit the park, because there was a big group of Asian people with cameras; some of them paused in their photography of the wildlife to take photos of the runners as we ran past.  It made me feel like a celebrity, like Kara Goucher or something.

On this second loop, I started giving myself an ice water "shower" at almost every aid station.  They had buckets filled with ice water and a sponge, and it was heavenly.  I thought of each ice shower as a coupon I could cash in for another 10 minutes of running, because I felt like it gave me a new lease on life.  The downside is that the water would run all the way down into my shoes, and as I squished my way towards the next aid station, I knew I'd pay the price with some good blisters.

By the third loop, when the sun came out from behind the clouds, I could only muster five minutes of running followed by a minute or two of walking -- except after an aid station ice shower, when I could do ten.  During this last stretch, my old friend, plantar fasciitis, really talked to me, and my IT band started flaring up too.  I imagine that running on flat ground for that distance uses the same muscles constantly, and that's what tires them so much.  I'm thinking technical, hillier courses are more my thing.  I kept doing the math in my head, though, over and over, and I figured I could do under 10 hours and PR if I just kept moving.  The only other time I've run this distance was at Hell's Hills, a much hillier course, so it's really not an apples-to-apples comparison, but I still wanted the PR.  I felt like it would be a confidence-booster six weeks out of being in a boot for six weeks.

It was great to chat with Rob and the Rockhoppers after I finished, and it was such a blessing to take a real shower at the park before heading back to San Antonio.  Rob put together a great race.  It was really well run, and I'd definitely recommend it to anyone looking to PR -- or anyone who wants to take a selfie with a gator.

I believe that my splits were 3:02; 3:18; 3:22, which impressed me, considering that I felt like I was dying by the third loop.  Now I just have to recover in time for Pandora's Box of Rocks this Saturday!  (Hence the ice bath and legs up the wall.)

If anyone actually read this blog post, kudos to you, and thanks!  I hope it was worth your while.  In case you don't feel like it was worth your time, and you are wishing you had that 5 minutes of your life back, here's a quick joke to make you feel better: What did the Zen Buddist say to the hotdog vendor? "Make me one with everything." ba-dum-ching! 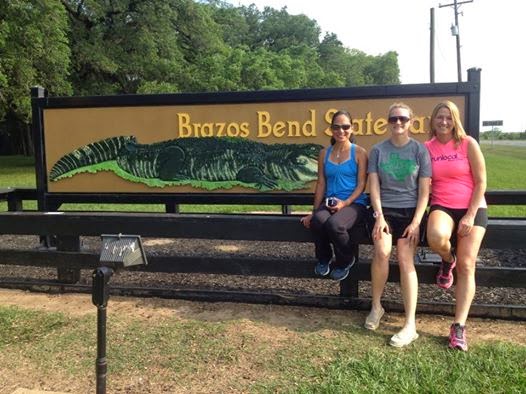