The sign-up
On Friday, at the gym, I proclaimed that it was about 2 months until my next 100 miler – Cactus Rose.  Then I went and ran the powerlines.  I cut that run short because I was overheated and tired.  Maybe it was because I was disappointed in myself for cutting so many of my runs short this week; maybe it was temporary insanity due to stress levels from work and school; whatever the reason, around 6pm I started wondering if instead of volunteering at the Habanero 100 the next day, I could run it instead.  I texted one of the RDs, Rachel, and asked if she happened to be overflowing with volunteers.  She checked and responded around 9pm, saying that I could go ahead and run.  I registered online about a minute later.

At about 4am, I woke up from a racing-related bad dream, and I laid awake for a while thinking, “What on earth was I thinking?!  This is insane! Who decides to run a 100-miler the night before?”

Honestly, this feeling stuck with me for the next two days.  I worried the entire race that I was being extremely cocky thinking I could just walk into this without properly training, tapering, or even thinking out a race plan.  In my experience, cockiness is rarely rewarded.  I worried that it would be Cactus 2014 all over again, with me blowing up and having to take naps in the middle of the trail, telling other runners to please go around me.  Regardless of what Karl Meltzer says, 100 miles is a long way.  On the other hand, it also seemed like a chance to do something epic.  And in the words of fellow Rockhopper Tom Bowling, spoken right before he ran a beer mile in his dress clothes, “YOLO.”

Loops 1-10
It’s always fun running new trails.  Buescher State Park has some great trails, with a lot of diversity – parts are rocky, parts are sandy, and parts are covered in pine needles.  I settled into a pace that I figured would get me through the loop in about 90 minutes.  (The race consisted of 14 loops, 7.2 miles each.) Fortunately, my left leg (the good leg!) started hurting around mile 3, so that occasionally distracted me from my terrible chafing pain, which is nice.

Let’s talk about the chafing for a moment.  Holy crap.  Jazzy took this photo of me sometime in the middle of the race.  That was the better side – my left side was even worse.  Not to mention the chafing under my sports bra and in my shorts!  I have never run shirtless before, but at various points during the race I briefly considered taking it all off and running naked through the woods; I figured that might be morally unacceptable to folks, however.  Probably only Jenn Shelton could get away with that.

Apparently everyone and their mother was breaking out in heat rash.  I had it all over my thighs.  It didn’t bother me, it just looked strange.  What did bother me a little were the horseflies.  At one point I had two horseflies alternately landing on my legs as I ran, and I yelled out “STOP BITING ME, DAMMIT!” just as two runners approached over the hill.  I smiled and said, “Nice job, runners!” like a non-crazy person would do.  I don’t know if they bought it.

Other interesting things from the first 10 loops were that I saw an armadillo, and I almost stepped on a broad-banded copperhead snake at 10pm.

During various trips through the start/finish between laps, RD Rob gave me reports: you’re 3rd overall and 1st female; you’re 2nd overall and 1st female, behind Matt Zmolek; Matt’s lying down; you’re 1st overall; you’re 1 of only 2 still in the race; the other guy’s not likely to make the time cutoff; you’re our only hope.  Better and better news, but I was feeling worse and worse.

Loop 11
The course is a lollipop, so I ran into Matt when he was completing his 10th loop, and I was starting my 11th.  I was excited to meet him, because I know he’s friends with Lorenzo, who is also an awesome guy.  Matt and I chatted/commiserated for a bit.  He had flown through the first 100k and really suffered from the heat.  He told me he was going to drop after that loop; that he was doing the math in his head and it wasn’t worth walking the next 9 hours just to finish.  Before we went our separate ways, I told him, honestly, that our conversation had been the most pleasant experience of the last 10 hours.

At this point, I was still jogging the downhills and most of the flats, and walking the hills okay.  But I was really slowing down, and that idea that I still had 9 more hours of this started messing with my head.  After this loop, I still have 3 more loops??  Now that it was the middle of the night, there were very few runners out on the course, and I guess the darkness, loneliness, and exhaustion starts getting to you.  When I finally made it to the aid station, I just wanted to sit down and cry.  But that’s not really my style, so instead I jokingly said to the volunteers, “Hey guys, I’m kind of at my breaking point here.  Got any good pep talks?”  I guess I was desperate for some earth-shattering words of wisdom that would suddenly energize and motivate me.  I don’t really know what I was expecting.  What I got was a very nice, perfectly wonderful, “Keep up the good work.”  I was crushed.   I picked up a cup of ramen noodles and did a 1,000 yard stare into the darkness as I thought, “How on earth am I going to keep going?”

Loop 13 (What happened during loop 12?  Your guess is as good as mine.  It’s a blur.)
The theme of the last two loops was heat exhaustion.  The race started at noon Saturday, so we were in the heat of the day, and then it was infinity percent humidity all night, and by the time it started really warming up again Sunday, I was feeling incredibly dizzy.  I had to keep leaning against trees.  I would sit for a few seconds on a bridge or stump, because it felt amazing to sit, but I had to stop doing that because standing up again made me so lightheaded.  I was walking so slowly during loops 13 and 14, but my heart felt like it was racing.  (I had ditched my heart rate monitor after the first loop, so I don’t have the data.)  At this point, I knew I would be the only finisher, but only if I finished.  Up until the last .2 miles I had a real concern that I was going to collapse on the course and not be able to finish.

Between loop 13 and 14
This part gets its own section, because I was probably at the start/finish aid station for 15 or 20 minutes.  I usually like to speed through aid stations, but this race was an exception.  As soon as I came in I asked Rob if I could cool down before I went back out.  He, Rachel, and all the volunteers were so kind and attentive – probably especially so since I was one of only 2 hundred-milers still in the race by that point (the others had dropped out or been pulled for medical).  Rob gave me his bandana and hat and the volunteers put ice on my back and neck.  They brought me Pedialyte and more gels.  They had only had a couple gel flavors for most of the race, and I had eaten about 60 gels by that point – mostly tropical and hazelnut, so I told them I’d give one of my kidneys for an apple cinnamon gel.  And Rob found a couple!  It’s the small things in life.

We sat around talking and joking for a bit.  Then I suddenly realized I hadn’t weighed in after my loop (weigh ins were mandatory after each loop).  They looked at me funny and said, yes you did.  I laughed and said, “That’s not a good sign . . .”  Then they sent me off, saying I had 5 hours to walk the last loop and make the cutoff.

Loop 14
This was the first 100 I’ve done without a pacer.  Still, I probably talked just as much during the last loops as I would have if someone were with me.  I was a little loopy. . . . I definitely shouted things like, “This mile never ends!” “This is more than half a f---ing mile!” “I hate this f---ing mile!”  “Just let it end!”  etc.  I also made statements like, “Way to be a tree, tree!  Nice job lying there, stick!  And don’t think I’m forgetting about you, cactus!  Excellent work!”  Translation: I was temporarily insane from being tired and hot and hurting.

During the second half of the last loop, I noticed I had become very quiet.  I was really focused on each step, Gordy Ainsleigh style – “I don’t know if I can do 3 more miles, but I can take one more step. And one more.”  I came close to crying multiple times, but I told myself firmly, No crying until the finish!  And then I didn’t cry at the finish.  I was just too tired and relieved and bewildered.  Out of it and overwhelmed.

Finish
Running down that hill to the start/finish was fun every single time.  All 14 times.

Thanks for an epic weekend, Rob and Rachel, all the runners, all the volunteers, and all the spectators. 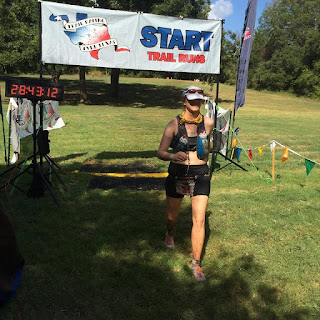 Philippians 4:13: "I can do all things through Christ who strengthens me."