Fossil Valley 9-Hour Race: What does it mean to "finish" a timed race? 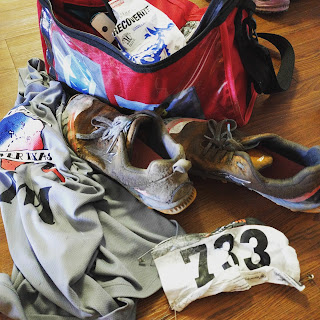 I remember reading an Ultrarunning Magazine article where Gary Cantrell discussed his race, Big Backyard Ultra.  Here's the description of the race from ultrasignup.com:

The concept is simple. At 0700 hours on Saturday, October 15, we will start a race around the 4.166667 mile Big Trail. The time limit will be one hour.At 0800 hours, we will begin another race around the trail.We will do the same at 0900, 1000, and so on, every hour, on the hour,until only one runner can complete a race within the time limit.Any runner not in the starting corral for any race, is not eligible to continue.No late starts!If no single runner can complete a race at the end, there will be no winner.

As I recall the article, it lamented the fact that runners tend to quit before they absolutely cannot go any further.  Some quit because they are just tired or sore and want to be done.  Some quit because they have a preconceived goal of how many miles they want to hit, and once they hit that, they feel like they've accomplished what they came for.  But almost no one quits because they literally can't take one more step.  In fact, I think Cantrell said that letting yourself slow down to the point where you're "timed out" is basically the same as quitting.

I thought about this idea a lot during my race this weekend: what counts as "quitting" or "giving up" in a timed race?  Is not giving your absolute hardest effort essentially the same as DNFing when it's a timed race?

I started off the Fossil Valley 9-hour race pushing pretty hard, especially given the heat, humidity, tough nature of the course, and length of time we'd be out there.  Eventually I let up a bit, still running everything but the hardest inclines, but not pushing the pace, in an effort to keep my heart rate down and save something for later.

As I ran, I kept doing the math in my head: Was I on track to finish 17 loops, like Anabel did last year for the win?  I thought so, but only if I kept my pace consistent and didn't have positive splits.  Looking at my Strava, I was very consistent; each loop was between 31 and 36 minutes (the 36-minute loop included a porta potty stop).

When I finally got to loop 16, as the sun rose and I ditched my headlamp, I knew the timing would be very tight.  It was about 6:25am, so I'd only have 34 minutes to finish the loop if I wanted to go for a 17th loop.  (You cannot start a new loop after 7am.)  I figured the 16th loop would take me 35 minutes; after all, I was exhausted, hot, and really over running 2.67-mile loops all night.  Honestly, I very much hoped I wouldn't make it back to the start/finish before 7am; the last thing I wanted to do was go out for one more loop -- especially since I was in 2nd place by a ways and wouldn't have any affect on my place by doing extra work out there.

But then I thought again about what Cantrell's point.  Was I a quitter?  Have I ever quit in a race?  Why would I start now, even when there is not chance of winning?  Is that really the only reason I race: to win?  Or is it that in racing, in pushing myself and testing my limits, I learn more about myself, I become a stronger person, and I define my character?

I ran loop 16 in 31:33, as hard as I could at that point, after 8.5 hours of running through the night.  When I got to the final straightaway at the end of loop 16, I ran as fast as I could, still secretly hoping I wouldn't make it before 7am, but leaving it up to God.  As I approached the start/finish area, David Hanenburg, the race director, yelled at me, "You've got 45 seconds!  Are you going?"  I hurriedly asked if I was still in 2nd place -- I was clearly still undecided whether it was worth it to go.  But David repeated, "45 seconds if you want to go!"  So without filling my water bottle or grabbing any nutrition, I took off, yelling, "I'm going!" as I punched my fist in the air.  The runners and spectators sitting all around the start/finish cheered, and off I went.

As soon as I turned the corner and was in the woods by myself again, I popped what felt like the 20th Montana Huckleberry Hammer gel I'd eaten that night.   Since I had thought loop 16 would be my last, I had stopped eating awhile ago.  I was also out of water, and maybe a bit dehydrated; after eating about 2/3 of the gel packet, I started retching.  My utterance at that time, "F--- this sh-t!"  reveals that despite my heroics in taking off for a lost-cause 17th loop that wouldn't affect my podium standings, I was still not happy to be out there.  But I did still have some Tailwind, and I had my friend Joe waiting for me to finish, so I carried on as fast as I could.  Loop 17 took me 34 minutes, meaning I still ran all of it except those two killer hills.

When I finished, I did feel a contentment that I gave it my all; I fought to the finish.  I think I feel happier now than I would have felt if I'd just quit after loop 16, before the full 9 hours had expired.  But what does this teach me about myself?  Maybe that I'm very prideful when it comes to risking labeling myself as a quitter.  Maybe that I get a weird pleasure out of pushing myself as far as I can go, and I get positive reinforcement from not giving up.  Maybe that I like to be the underdog and fight for a lost cause.  I'm not really sure.

One thing I do know, is that I need a break from running.  I've raced 3 ultras in 5 weeks, and I've pushed hard at all of them.  That also means that I've pulled 3 all-nighters in 5 weeks, because they were all night races.  I'm feeling a bit burned out and unmotivated.  I told myself during the race that my reward for pushing so hard could be not running all this week.  Isn't that sad, that a runner's reward to herself would be not having to run?  That's definitely a sign that I need a few days off.  Maybe it's a good time to learn how to play Pokemon Go?