Going into this race, I felt like there was a 50% chance of it going well, and a 50% chance I'd end up lying in the middle of the trail in my standard bonk position.  Fortunately, it ended up all right.  Here's a quick recap of my race this time around.

Loop 1 - Steady Pacing
I started this loop behind friends Larry Kocian, Tom Bowling, and Joe Prusaitis, so I had the advantage of getting to hear their great stories, which kept me entertained and comfortable in my pace.  I can't hear Joe's "cricket in the eye" story too many times.  Before we parted ways, Tom gave me the "gift that keeps on giving": he got "99 miles of Cactus Rose to go" stuck in my head with every mile we ticked off together.  Thanks for that, Tom!

When I came through Equestrian the first time, Chris Russell saw the blood all over my legs and asked me if I'd had a bad fall already.  The sotol are that prolific this year, and that destructive!

During this loop, I saw the sunrise from the top of Ice Cream Hill.  Life doesn't get much better than that.

Loop 2 - The Best Crew
The highlight of loop 2 was getting to see Joe Schmal and his wonderful daughters.  They were at Yaya aid station, the Lodge, and then Yaya and Equestrian during loop 3.  His youngest asked how I was able to run up the hills, and I had to answer truthfully: as a rule, I never run up anything a marble would roll down.  I hope this information didn't tarnish her opinion of  me too badly.

Loop 3 - Getting the Band Back Together
Travis Bagwell was my first ever pacer for my first ever hundred, Cactus Rose 2013.  Back then, he practically had to force feed me, and he couldn't get me to do anything faster than a power hike from miles 50-75.  I was really happy to hear him say this time that I'm a totally different runner now than I was back then.  We kept a pretty good pace -- my 3rd loop was actually faster than my 2nd loop.  We were able to catch and pass the first female.  For the rest of that loop, I assumed she was right behind me, but when we got back to the Lodge (start/finish), we found out that she dropped.

Travis held me back from getting too excited and wasting my energy; he is a master strategizer and could probably make a decent living as a professional pacer.  (Hear that, Travis?  That's the business you can start when you and Martha finally pack up and move to Colorado!)

Before Travis left me at mile 76, he calculated how fast I would need to go to break 25 hours, which seemed like a good goal.  He told me, "It won't be easy.  It will be hard.  But you can do it."  That meant so much to me.  He also said that he was going to get a few hours of sleep and then hang around to watch me finish.  Knowing that he was there waiting for me was a great motivator during that last loop.

Loop 4 - Music and Motivation
I enjoyed the first half of the 4th loop, since due to the "washing machine" (clockwise/counter-clockwise) nature of the course, you get to see all your friends that are on a different loop.  It was fun seeing Cara, Jean, Lisa, Steven, Sheila, and their pacers.  After a while, though, there were no other runners on their third loop, and it was just me, the moon and the stars, so I plugged in some music.  Between Kenny Loggins, the thought of Travis waiting for me at the finish line, and the desire to finish as soon as possible so I could go spend the day with Joe, I managed to keep moving at a good jogging speed, through what my Garmin tells me is actually a 102-mile course.

I didn't meet that last goal, but like Homer Simpson says, "If something's hard, it's not worth doing." Even though I didn't meet that goal, I was able to improve from last year's course PR of 26:35. I'll just have to keep coming back to Cactus until I'm able to break 24 -- or until I build up enough calluses on my legs that I'm immune to sotol scratches.  That would be a great super power. 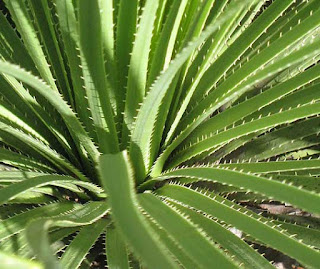