WBC4: Greatness Redefined
The 4th Annual Whataburger Challenge is in the books, with history-making performances achieved!
With only 6 competitors this year, it was the first time that the WBC had more spectators than athletes, much like you’d see in any professional sporting event such as the Super Bowl, NBA finals, etc.  All but one of the six were return competitors; the one-and-done folks that couldn't face up to the extreme nature of the race have been winnowed away, and only the hardiest of the hardy, the elite of the elite, remain.


Some top storylines this year: 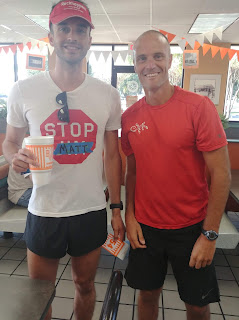 Franz The Vegetarian and Matt The Assassin (PC: Jess Winnett)

At 9:07 sharp, the gun went off and the gorging began.  Chris was done with his #1 in under 3 minutes and took off, with Joe "Schmo" and The Assassin right behind him.  Those three were followed shortly after by Mike, then Franz, and finally Wimpy Rich.

Matt went directly into Assassin mode, screaming down DeZavala at 6-minute pace, leaving the other competitors so far back they could no longer see him after a couple miles.  This aggressive gamble, typically ill-advised, paid off for Matt as the second restaurant was not ready for the volume of WBC orders.  This second store always seems to be the wildcard!  While Schmo and Franz (Franz was competing in the first-ever Vegetarian division) arrived 3-5 minutes later, their orders were more like 10 minutes behind Matt's.  "Sweet" Chris was heard to say that Denny's service was faster, and that he hoped Matt choked on that third burger.  One must wonder if any collusion took place with store employees. 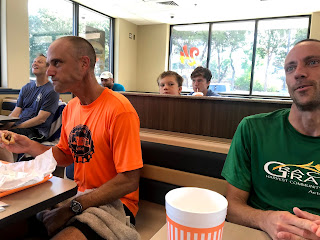 Matt finishes up #2 while everyone else waits

Matt departed the second store before anyone else even received their #2 combo!  Legitimate worry began to permeate the dining room.  Mike "The Ringer," despite arriving 5th, was the second to leave, albeit 16 minutes behind Matt.  A minute later, Schmo and Franz finished and took off, very slowly, after the leaders.  Blaine Adams, one of the spectators, seeing pools of sweat forming, foolishly offered Chris a towel from his vehicle - Chris sat on it while dining and once complete with his #2, gave it back to the regretful Blaine. 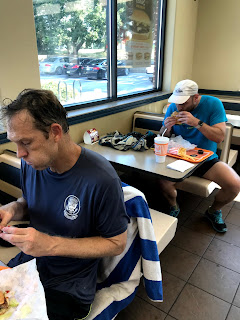 Chris at WB #2, with Mike Ruhlin in the background

The heat took its toll on Rich, and he was the race's first casualty, a DNF partway through his #2 combo; but true to his persevering nature, he still managed to run all the way to the third restaurant with his partially-eaten burger for the weigh-in.

The Assassin arrived light years ahead of the others, but the tide had turned.  As Franz and Schmo finally arrived, both having been reduced to a pathetic walk/jog during the run, they saw Matt's entire #3 combo just sitting there, untouched.  Brian "Banjo McNaturepants" Ricketts, winner of WBC1 like a million years ago, was texting fellow WBC1 finisher (but WBC 4 spectator) Tom "Bro-ling" Bowling to get updates - he asked how Matt was doing.  The response: "Scott Rabb-like," referring to Rabbers' (also a WBC4 spectator) WBC1 performance in which he could only stare at the tray of food. 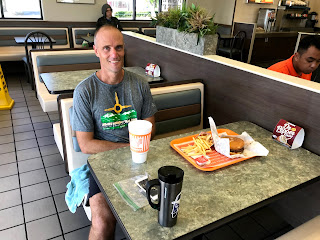 Paralyzed.  A familiar scene at WB #3 (this was also the 3rd different shirt Matt wore?)

Mike The Ringer arrived a couple minutes after Schmo, and the race's fate was set.  At 2:07, the 4th-fastest time in WBC history, Mike became the competition's only 2-time champion!  Greatness. 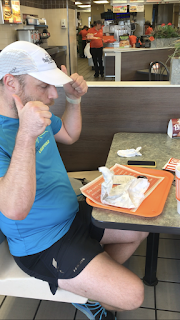 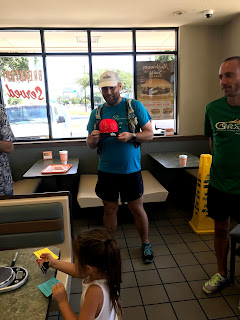 The prize he chose for 1st?  A Rockhopper hat (take that TrailZen)!

Schmo, having previously decided not to even order the #3, changed his mind when he saw the opportunity for his best finish, place-wise.  He ate all the fries, slowly, and stopped with the 3/4 pounds of burger remaining, to grab 2nd place.

Then things got interesting.  Chris had made the same decision as Schmo, but saw the opportunity to complete his mission of taking down the Assassin, as Matt bowed out already.  Chris made it through half his fries to grab the final podium spot, just ahead of Matt, who took 4th. 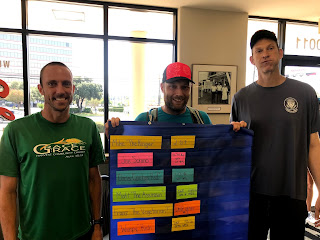 The podium (L to R: Schmo, The Ringer, Cactus Kid)

Franz made it through the veggie version of the #1 and #2 meals - a disgusting pile of fried hashbrown sticks in a standard Whataburger bun - and definitely deserved first-place vegetarian honors, even though he was the only competitor in the division. 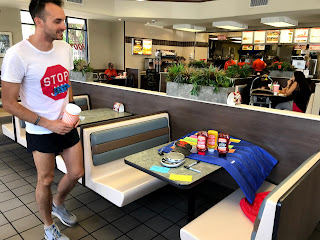 Finally, the coveted DFL (and WB Ketchup bottle) went to WBC2 podium finisher Rich, who showed up for his 2nd WBC event, joining a short list of elite competitors to ever attempt this race more than once. 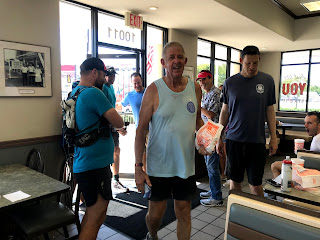 Rich with his #2 bag of deliciousness

A note for those considering a WBC5 entry: you can do this - be sure to train throughout the next year, so you may too have your name forever inscribed in Whataburger lore.