For a while now, I've been keeping a log of "coincidences" -- in other words, times when I feel like God is speaking to me through the everyday events of life.  Do you ever think about this during your day?  Today's "coincidence" experience was just to outrageous and funny not to share.

This morning I woke up at 8:00, so I decided to find a parish with 9:00 Mass.  I Googled "San Antonio find a parish" and found that Immaculate Heart of Mary, one of the 5 Catholic churches downtown, has a 9:00 Mass in English.  I went to put on my jeans, only to realize that they were in the laundry and the only other pair I own was all wrinkled (and had a hole in the crotch, but I didn't notice that until the afternoon.  Oops).  I put on my nice Notre Dame fleece and nice loafers and hoped that would compensate for my shabby pants.

As I walked toward the church, I felt really awkward about my raggedy appearance said a quick prayer that God would make me feel welcome in this church anyway.  When I reached the open doors, not just one, but three ushers said good morning and shook my hand.  After I had said down, an elderly man named Antonio came over and introduced himself.  He handed me a brown scapular and asked me to say a prayer for him.  Then a female usher came over and asked if I would like to help bring the gifts up to the altar at the appropriate time.  By the time when we stood for the gathering hymn, and I opened my hymnal and saw that we were singing "All are Welcome," I just smiled.  I felt like God was not only asking, "Do you feel welcome yet?" but also, "Like my sense of humor?"  The answer to both questions is yes.  I couldn't help smiling as I sang.  To top off the experience, the gentleman in front of me complimented my ND shirt during the Sign of Peace and told me he and his wife had visited Notre Dame a while back.  A few nice words about my alma mater, my home away from home, where I have so many wonderful memories, does wonders for making me feel good.

So thanks, God, and please keep these "coincidences" coming!  Please help us to recognize when you speak to us in the conversations, events, and circumstances of our everyday lives.  Amen.


Posted by Julie Schmal at 2:16 PM No comments:

Rocky Raccoon 100 was my first hundred-miler since Cactus Rose 100 last October, when I died a little bit and my soul left my body alone on the trail for awhile.  Okay, that's maybe a little over-dramatic, but I was apprehensive going into another hundred after that awful experience. 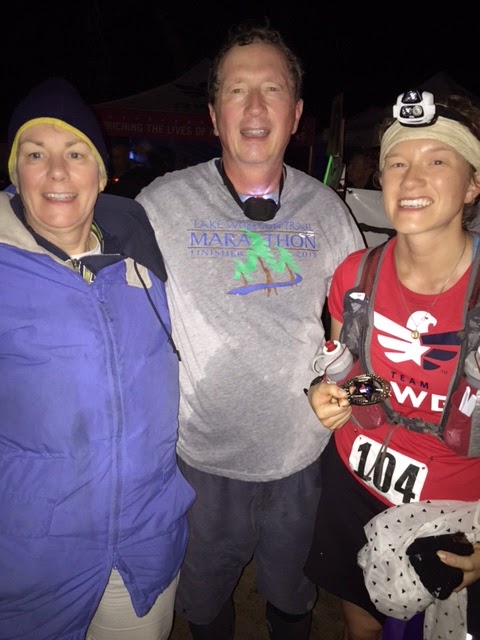 Fortunately, my wonderful parents came from Minnesota to visit and support me, and that gave me something to look forward to at the end of each loop.  I was a little scared that they would witness a total meltdown, but I was more excited for them to get to experience the atmosphere of a trail ultra and meet some of my awesome Rockhopper friends.  In the end, their encouragement, hugs, and enthusiasm helped me to a PR of about 3 hours.  In those 22+ hours, I learned the answers to three questions that I think will help me in future hundred-milers:

1. What helps you regain energy during a low spot?
On my last loop, around miles 85 through 88, I was really low on energy.  My dad was pacing me for that loop, which was amazing.  It was his first trail run, and I am so thankful he agreed to brave the dark and the roots to be with me.  In these miles, my power walk became slower and slower; my dad would stop and look back to make sure I was still behind him, because I was moving so slowly.  I just felt like I had nothing in me.  Three things helped me get back on pace: 1) I had half a cup of potato soup at Damnation aid station (around mile 86), which was my first real food of the race; 2) I asked my dad to say the Rosary with me; and 3) I requested that my dad tell me the joke about the guy who ate beans, and he kindly agreed.  Here's the joke, in case you're interested:

On Joe's birthday, he left work a little early, because his wife promised him a special birthday meal at home.  On his way home, he passed a food truck that sold the best bean dishes.  Joe had a weakness for beans; he just loved to eat them, but his wife forbade this, since it caused some gastrointestinal problems in Joe.  "Heck," Joe thought to himself, "It's my birthday, I should treat myself.  I can pop in and out and get home in plenty of time, and my wife will never find out."  So Joe went in and ordered a plate of beans.  He ate every last one with relish, and it was so good that he went ahead and ordered a second plate.  After he finished, he drove home just in time for dinner with his wife.

When Joe opened his front door, his wife met him at the threshold with a blindfold.  "Hi, Joe!  Happy birthday, honey.  Thanks for coming home early.  I've made a special dinner for you.  But I don't want you to see it quite yet."  She put the blindfold over his eyes, led him to the dining room, and got him seated, when just then, the phone rang.  She hesitated, and then said, "Sorry, I'd better answer it.  Just a second, sweetie, I'll be right back."  As the door closed behind her, Joe let out a sigh of relief, because he'd been feeling an immense sense of pressure in his lower abdomen, which had been building ever since he'd come in the front door, and he didn't think he could hold it much longer.  So as soon as his wife left the room, he let out one enormous fart -- and then a string of medium-sized farts.  That felt so good, to relieve that pressure, but it wasn't the end.  Here came another one -- whew!  That smelled so bad, Joe could have sworn it would cause the paint to start peeling from the walls.  Here came another big one, and then a chain of toots in quick succession.  Joe could vaguely hear the sounds of his wife's conversation coming to a close, so he really let go and gave it all he had, in a desperate attempt to clear all the gas from his bowels before his wife re-entered.  She could never know about his forbidden stop to the food truck.  He waved his hands, trying to fan the smell of rotten eggs from the air.

Seconds later, in came his wife.  He could hear her footsteps coming closer.   She leaned in, removed the blindfold, and there around the table were seated all of their closest friends.  "Surprise, honey!  Happy birthday!"

I don't tell it half as well as my dad, but you get the idea.  By the end of the joke, I was laughing and power-walking with gusto.  I continued drinking some soup at the remaining aid stations, and I was able to run it in at the end.  I think the prayers helped as much as anything.  And just being with my dad made the last loop the total opposite of last year's RR100 experience; it was a time of great joy, rather than lonely suffering.

2. How many gels do I actually take during a hundred-miler?
I've never really been disciplined enough in my gel-taking to track my gel use throughout a hundred.  But I did a pretty good job this time around of sticking to a schedule.  My best estimate is that I took 50 VFuel gels.  (4 hours x 2 per hour the first loop; 4 hours x 3 per hour for the next 3 loops; and probably about 6 during the last loop, at which point I switched over to eating soup from the aid stations.)

3. What's the best cross-training for a hundred-miler?
I really think the power-walking I did on a daily basis in the three weeks between Bandera 100K and Rocky 100 helped me during the race.  I ended up doing a lot of power-walking, starting in loop 3.  Loops 4 and 5 largely consisted of power-walking.  In my training, I clocked sub-13-minute miles walking, and I think that really paid off during the race.  Walking fast versus walking slow can really shave off a lot of time in the long run.  I also think that focusing on walking instead of running between these two races helped my recovery going into Rocky, something that I had vowed to improve from last year's experience.

I suppose one final thing I learned is that a pine cone works okay as toilet paper -- as long as you go in the right direction.  I still prefer rocks, though.

Posted by Julie Schmal at 4:28 PM No comments: