This past weekend, I was fortunate to experience the inaugural Lone Star 100 mile race, put on by Rob and Rachel Goyen of Trail Racing Over Texas.  I had been hoping to run it, but had wanted to wait until after HURT before signing up.  Since I DNF'd HURT but was uninjured, I was eager to register.  In fact, I was so eager that I registered for Lone Star the day after HURT, while on a hike with Edward and Joe.  Edward had been training like a rockstar for Lone Star, and was really excited to race it.  Joe had told me that if I decided to do it, he'd be happy to drive us to El Paso and crew and pace me.  Yep, I'm a lucky girl.

Here are my race highlights.

Pre-Race Meal
L&J's cafe by the cemetary. Boom. During the race, Edward told me that eating so much Mexican food had caused him some GI troubles, but I say, only a poor craftsman blames his shoddy tools. Amirite?

Loop One: Patience
Joe, Edward, and I had raced the Franklin Mountains 50k on pretty much the same trails as this race, and that had taken me about 8.5 hours, so I had an idea about how brutal this course was going to be.  With that in mind, I started off super conservatively.  Joe, Edward, Dustin, and I had placed bets on what we thought the finishing rate was going to be, and my guess had been 37%.  (The actual figure turned out to be less than 30%, and that includes runners who took longer than the stated cutoff time of 36 hours.)

By the second aid station, I was in second-to-last place.  I had to swallow my pride as people asked me if I was feeling okay.  They all thought something was wrong, but as I told Myke Hermsmeyer on my way up North Franklin Mtn, I was placing my money on "slow and steady," with the feeling that finishing within the cutoff time would be a win -- and might even be a literal win.  I felt that most of the people ahead of me would end up dropping out.  Thank goodness I was proven right.  But I had to be really patient for that to happen -- about 34 hours and 15 minutes of patience.

At each aid station accessible by car, and also at Mundy's Gap, the "highest aid station in Texas," Joe was there to help me out and cheer me on.  He made four trips up to Mundy's over the course of the race, which involved climbing up a long scree field to the top of a mountain ridge.  (While there, he helped out runners and volunteers alike.  He even made a special trip down to get more oranges when the aid station ran out, and climbed back up the mountain with a backpack full of oranges.  He also brought Whataburger for the volunteers who were up there for 48 hours straight.  What a guy!)

Loop Two: Into the Night
Back at the start/finish, ending loop one and about to begin loop two, I changed my shorts, bra, and shoes in the port-o-potty.  I wanted to avoid the terrible chafing I suffered through at HURT.  Fortunately, El Paso is a lot less humid than Honolulu.  But I still had some issues (I must have incredibly sensitive skin), and I wanted to nip the problem in the bud.  Joe helped me add some more Trail Toes tape on my back where the skin was starting to chafe.  Changing from Altra Superiors into Hokas made my feet feel amazing for the first part of loop two.

I saved a treat for myself during loop two: the night before the race, Edward gave me the most amazing gift.  It was an iPod shuffle loaded with audio from Simpsons episodes.  That kept me entertained a long time during the late afternoon, evening, and nighttime on Saturday.  This was the opening scene of the first episode I listened to during the race.  "Are we there yet?" "No."  How appropriate.

Another highlight of loop two was the beautiful moon.  It was full, or almost full, and a brilliant reddish color, with reddish clouds around it.  I risked tripping and falling several times because I couldn't keep my eyes off it.

Loop Three: TGFJ
I picked up Joe for loop three around 2am.  I had worked so hard to be vigilant with my nutrition and hydration throughout the race, in the hopes that I could present myself to Joe in good condition when it was time for him to pace me.  I was still smarting from my DNF at HURT, and from how pitifully I behaved when Joe and Edward paced me there.  After a lot of reflection on what went wrong there, I zoomed in on the fact that I got way off my nutrition.  I'd be just starting a 1,500-foot climb and realize it was time to eat, but I didn't want to stop my ascent, so I'd put it off, thinking, "I'll wait til I get to the top of this climb, and then I'll eat."  After enough situations like that, I think I just got deep into a hole of calorie deficiency, and once that happens, the will to eat anything is entirely zapped, and I just dig myself deeper and deeper.

To prevent this during Lone Star, I made myself eat something every 20 minutes or so.  (This is way more tiring than you can imagine, if you've never tried it.)  Sometimes it would just be some crackers or chips, though, which maybe wasn't as many calories as I needed.  I guess it says something that post-race, I couldn't remember much about the first part of loop three. Yesterday, reflecting back on the race, I asked Joe, "When we started loop three, was I moving okay?  Or was I already struggling?"  He reminded me that right after we started loop three, I insisted that I had to sit down on the bench on the ridgeline for a couple minutes.  "Oh, yeah.  I remember that now."

My lowest point, Joe and I agree, was the stretch called Shaeffer's Shuffle.  That was a much worse climb going the other direction, during loop two, but during loop three, I just lacked any energy at all.  I was so slow-moving.  And I had to sit down on a rock and rest once or twice.  But I had told Joe to tell me every 20 minutes to take a gel (my watch had died before the end of loop two), and that's what we did.  For thirteen hours straight, Joe followed a strict regimen of telling me to take a gel every 20 minutes, and I followed a strict regimen of emitting a moan, taking another gel, and holding my stomach as it immediately cramped.  After a while, even taking a sip of water made my poor stomach cramp.  But I decided that, horrible as the stomach pains were, it was worth it to get my energy back.

Going up North Franklin summit the third time, Joe and I enjoyed watching for the 1st place male and then watching for Edward, who we knew was closing in on 1st place.  We knew he had it in him to win the race.  He looked so strong and focused when we saw him, it was awesome.  We were also excited to see Myke Hermsmeyer, the best race photographer in the world, climbing the mountain again to take photos of our last summit.  As soon as we reached the top, getting my final summit bracelet and leaving a note for Rob, a cold front seemed to move in.  The temps dropped and the winds picked up significantly.  We ran back down to Mundy's aid station, and that's when I started feeling good again.

The stretch from Mundy's to East aid station was my best in that loop, according to Joe.  Then from East to West aid stations, we were propelled along by a tailwind.  The stretch from West aid station to Pavilion was challenging, to say the least.  The winds were now cross-winds and headwinds, and gaining in strength by the minute.  That stretch seemed to last forever.  The only thing that made it enjoyable in the least was Joe's encouraging words.  Every once in a while, he'd say something like, "You're moving really great here," and I'd believe it.

When we finally climbed up to the Pavilion aid station, I knew we only had 1.5 or so miles left to get to the finish line, so I didn't stop, but went right up towards the ridgeline that would take us home.  Immediately, though, I was struck by the incredible force of the winds.  I got knocked down and banged my knee.  I couldn't stand up, the wind was so strong.  I really couldn't see how I'd be able to get myself to the finish line along this ridge.  After crouching on the rocks for a minute, I shouted to Joe over the wind, "It's not going to let up, is it?"  "No."  No, it was sustained and was just going to keep getting worse.  We had to keep going.

For the first part of the ridgeline, we were shuffling in a bent-over state (which was agony on our lower backs).  Then, after a while, we couldn't even get by doing that, because the winds were so strong that we were getting blown over.  So we started moving like crabs, crawling on our butts.  A good strategy for not getting blown off the mountain and dying, but unfortunate that our hands kept landing on cacti, and that my butt is covered in bruises from the rocks.  It is also just about the slowest possible way to ambulate.

Joe took a video of the last part of the descent, when we were lower down, and so didn't feel like we were about to die.  He wishes he could've taken a video along the ridge, when the winds were at their strongest and craziest, but we were both too focused on survival for that to happen.

That final adventure with the wind made the finish even sweeter.  I was so happy to be alive and done, to have survived the race; that meant so much more to me than winning.  When I hugged Joe, my legs kind of gave way, and I got a little teary, and it sure wasn't because of my place on the podium or my finishing time.  It was that he and I got to share an incredible adventure, one that at times seemed impossible to accomplish, and now we get to share those memories forever.  We talked about it afterward, and we both feel that way: we didn't appreciate the situation at the time, but looking back on it, we're glad we got to experience it.  I guess that could be a metaphor for a lot of situations in life.
The finish line was fun for a few minutes: high-fiving Edward, whose incredible hard work in training, brilliant planning and strategizing, and smart and strong race earned him a well-deserved 1st place overall finish; getting a hug from Rob and Rachel; getting photos taken by Myke; getting wrapped up in a blanket by Rob.  But the winds were not dying down, and we were all chilly, so Joe and I hightailed it to the car as soon as possible.  And took this selfie.  I love it, because it's us in our natural state: dirty, exhausted, exhilarated. 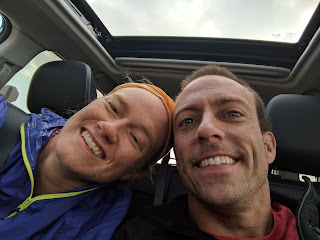 Until the next adventure . . .

Posted by Julie Schmal at 8:47 PM No comments: