Halemau'u Trail Report, or: The Time Where You Find Out Just How Stupid I Can Be

Last time I was in Maui, I took the Sliding Sands trail in Haleakala National Park for a 20-mile out-and-back, which was amazing.  This time I wanted to try something different in the park, so I took the Halemau'u Trail.  I'll describe it, in case you ever find yourself wanting a good run or hike on the island, but also in case you want to play a quick game of "How many stupid decisions is one person capable of making in 1 day?"  Let's play.

I wanted to see the sunrise from the summit of Mt. Haleakala, so I woke up at 4pm and left my hotel around 4:15.  At some point during the drive, I thought about turning on my Garmin, and then suddenly realized I had forgotten it back in the hotel room.  (If you're playing along, that's blockhead error #1 for the day.)  Then I briefly considered using the Strava app on my phone -- but I wouldn't have enough battery, even with my charger -- dang it, which I also left in the hotel room.  Nerds!  (#2)  Okay, I figured,  I'll just have to rely on the trail map from the visitor center to know how far I've gone.

In order to conserve battery on my phone, I had taken a screenshot of the directions to the park from Google Maps, and decided to rely on my ability to read said directions and follow street signs.  (#3)  Long story short, I ended up in Wailea, which, according to Google Maps, is an extra 22.6 miles of driving.  I say that now, because the extra mileage will soon become an integral part of this story.

Oh, had I mentioned that when I left my hotel, I had at least a quarter tank of gas in the rental car?  Maybe as much as a third of a tank.  Surely enough to get me to Haleakala and then back, if not to the hotel, at least to a gas station, no sweat. (#4)

I'd been told the national park was about a two-hour drive.  It ended up being more than that, due to error #3.  By the time I arrived at the park entrance -- in the middle of nowhere -- the fuel display read 2 tiny bars' worth of gas.  My car back in San Antonio tells me exactly how many miles I can drive before I'm out of gas.  And even then, I figure I actually have at least 20 more miles before I'm really, really out.  With this rental, though, I had no idea.  How much gas is equal to 2 tiny bars?  I didn't know, but I was sure glad to finally be in the park.  Except I had forgotten a crucial piece of information.  According to the gentleman who accepted my $15 entrance fee, "It's another 30 minute drive from here to the summit." Crap on a cracker. (#5)

After 30 more minutes of driving 15 mph up, up, up a windy road in the pitch black, I made it to the summit, in plenty of time for this gorgeous sunrise. 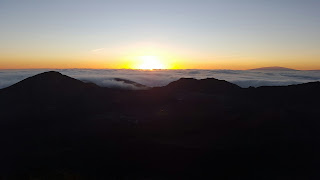 Putting my rental car keys into the velcro pocket of my hydration vest, I took off on the Sliding Sands Trail toward the Halemau'u Trail.

Did you catch #6 just then?  If not, just stick around.

The trail drops from an altitude of 9,740 ft to approximately 7,200 ft in about 4 miles.  That makes for a great downhill run, but can really trash the quads.  I didn't care; my running has been so inconsistent lately due to injury that on this day, when I felt pain-free, I was happy to run, whatever the consequences.  Previous visits to this park have involved gale-force winds, fog, rain, and cold, but this was a beautiful, sunny, even hot day, and I loved every minute. 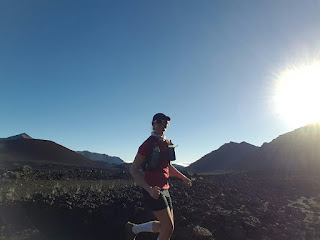 Sliding Sands is just as it sounds -- the trail is composed of loose black volcanic sand and cinder.  After 4 miles, you have the option to continue on this trail to the Kapalaoa Cabin, or turn left to the Halemau'u Trail, which is what I did.  It was hillier than Sliding Sands, but just as beautiful.  It took me out of the dry, desert basin of the crater, into a wetter landscape with tropical vegetation, past the Holua Cabin, and then up a series of switchbacks until, after 11.2 miles, l I was back at 7,990 ft. 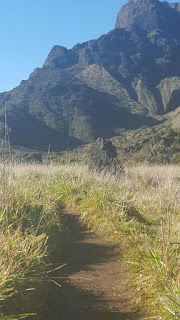 Instead of doing an out-and-back, I thought it would be more interesting to take the road, which is where the Halemau'u Trailhead is located.  At about the 14 mile mark, I reached into my vest pocket for something, when it dawned on me -- Hey, I could've sworn this is the pocket where I put my keys. . . .  (Yeah, that was #6.)  I searched every pocket, but yep, they must have fallen out at some point along the trail.  So, decision point: do I retrace my steps, and end up doing 28 miles, not find my keys, and not be able to do anything about this car situation until it's almost dark?  Or do I take the shorter way to the visitor center, which was 5 miles away, in the off chance someone found my keys and turned them in?  If I went to the visitor center and they didn't have them, I'd have to turn around and retrace my steps anyways, but it would be a longer trip.  I decided to pray fervently and head to the visitor center.

Someone out there's looking out for me, because the visitor center did have my keys.  I made sure to hug the national parks employee who handed them to me.  Praise God!

And so, on to my next adventure: driving a car with "1 tiny bar" of gasoline 27 miles down a remote mountain into town.  Fortunately, the drive was literally downhill all the way out of the park.  I didn't touch the gas pedal at all, just the brakes.  Unfortunately, the gas station that seemed the best bet on Google Maps was a decrepit shack with a sign reading, "Closed on New Year's Eve."  (#7)  So it was another white-knuckled 6-mile drive to the next closest one.  But *whew*!  I made it. 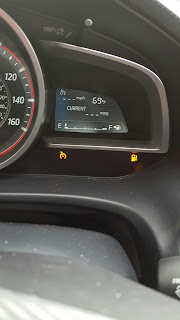 What with all that stress, I had cut my run shorter than I wanted, so on my way back to the hotel, I did some of the Lahaina Pali Trail, which is 5.5 miles each way, going straight from the ocean up a cliff, taking you from 100 ft elevation to 1,600 ft.  Finishing that trail is now on my to-do list for the next time I'm in Maui.  The trail is so technical that running up or down is nearly impossible, but it's great hill hiking training. 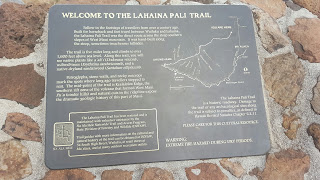 So all in all, 7 huge idiotic moves in 1 day, yet when I got back to my hotel, I still had time to go snorkeling, swimming, and body surfing before dinner.  The day turned out wayyyy better than I deserved, for which I am truly grateful.

Posted by Julie Schmal at 7:32 PM No comments: