This Rockhopper endurance eating competition promised an inter-city competition featuring two legends from Austin.  Ominous clouds on the horizon and thick humidity in the air set the stage as 9 hungry, naïve competitors toed the line for this 9.3-mile, 3-restaurant, 4000+ calorie showdown.

At restaurant #1, tension mounted as the competitors were served their massive burritos, which weighed just over a pound each, along with chips and guacamole.  At 8:33am the gun went off and the gorging began.  The literal storm outside would eventually skirt San Antonio harmlessly, but the storm within the digestive systems of the foolhardy competitors was just beginning as each eater finished up meal #1.

“Sweet” Chris Russell, accompanied by his 2 lovely pacers, was the first out the door.  He was followed by Mike “The Ringer” Ruhlin from Austin, then Julie “Habanero Kid” Koepke.  The rest of the competitors would soon follow, and the field started making its way along the 6-mile route to the next restaurant.  Joe “Schmo” and Steffen “Two F’s” Andersland joined up and took the lead all the way to Taco Cabana #2.  Meanwhile, Sweet Chris, his pacers, and Erin “The Tornado” Good were already diverted to a port-a-potty along the route.  Refried beans will do that.  “Maffatone” Tom Bowling, in a complete departure from his normal, steady heart rate strategy, was setting 5k PRs and lighting Leon Creek on fire on this first leg – would this risky move pay off, or backfire?  Along the way, competitors were also cheered on by pacer Jess Winnett, Kristen Malloy, Tony Maldonado (riding his bike along LC) and Michele Genereux, who decided (probably against her better judgement) to witness Tom’s performance first-hand this time.

Andersland and Schmal were the first to order at the second restaurant.  Trail-running legend Steven “Eatsum” Moore from Austin was not far behind, despite taking the longest to make his way through the 1-pound beef burrito.  Bowling came in next, having just bagged a 5k PR according to his watch.  Then Koepke and Ruhlin ran in with Jess, followed shortly thereafter by Good.  Eric “Game-Time Decision” Lamkin – who waited until the last minute to decide to participate, as well as to decide on which menu to order from (meat vs. vegetarian) – also arrived at the second restaurant around this time.  Russell wasted no time in finding a comfortable patio spot in which to create a small kiddie pool of sweat.  The two leaders quickly lost their spots as Ruhlin, well-known in Austin’s endurance eating circles, made the second 1-pound burrito disappear faster than the Rockets in the NBA playoffs.

With Ruhlin already making his way down the last 3.3 mile stretch of Bandera Rd, the others had their work cut out.  Schmal, Bowling, and Koepke (who put away her second burrito incredibly fast), all left together in the chase pack.  Unfortunately, Taco Cabana #2 would also have a few casualties.  Lamkin, Moore and Good would not even order food at the third restaurant.  When Good arrived at the last restaurant, she announced that she DQ’d “somewhere along Bandera Road,” having unleashed a bean-and-cheese tornado of puke.

Ruhlin and Schmal arrived 1-2 at the last restaurant and ordered, but Schmal could already taste defeat.  While Ruhlin attacked the last burrito (another 1-pound brick of steak, rice and beans), Schmal could only nibble at it, bit by bit.  Bowling, the only TC competitor to have successfully finished the Whataburger Challenge last year, was next into the restaurant.  Koepke, Andersland and Russell would follow.  However, Ruhlin was just too strong.  At the 2:26 mark, he gulped the last of his peach margarita and raised his fists in victory.  He would be the only competitor to finish all 4000 calories; the rest would have to be weighed on the food scale.  Schmal somewhat redeemed a poor performance at the Whataburger Challenge last year, getting through almost all of the last burrito – only 3.3 oz. remained uneaten from the 17 oz. behemoth, earning him second place.

The most dramatic moment of the competition was about to occur.  Everyone had weighed their remaining food contents by 11:32am, 1 minute before the cutoff, and it appeared that Russell had a narrow edge over Steffen for 3rd place, with 10.1 ounces remaining versus 10.2 for Andersland.  But Russell was still chewing on a huge mouthful of food as the seconds ticked toward 11:33 (the 3-hour mark).  Once time was officially called, Russell had to spit the remaining un-swallowed tex-mex into the wrapper to be re-weighed.  The new weight was 10.9 ounces, pushing Russell to 4th place, and forcing everyone to recoil in disgust.

The awards ceremony began promptly following the competition.  The coveted DFL award, a toilet-shaped air freshener, went to Good, although all competitors would probably benefit from such a prize.  Ruhlin graciously accepted his new Squatty Potty © for 1st place overall.  Schmal and Koepke awarded 1st place male and 1st place female to themselves – plastic shovels to hopefully aid in shoveling food into their mouths a little faster next time.  Andersland scored the final prize of the morning – a “grow your own chili plant” in honor of defeating his spicy competition on the way to a 2nd place male finish.

Another successful Rockhopper eat and run competition is in the books.  Mark your calendars now for our 2nd annual Whataburger Challenge, to be held Labor Day 2017.  We also hope to continue this new tradition of a spring eating challenge, which will feature new restaurants each year. 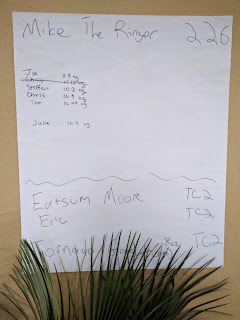 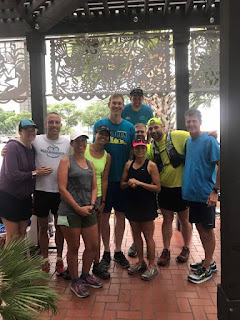 Posted by Julie Schmal at 3:34 PM No comments:

One month on AIP, then ran a 50k. Here's what happened. (Wow, I should write clickbait headlines!)

I ran Trail Racing Over Texas' Wildflower 50k yesterday.  It seemed like a good experiment, because the race took place after exactly once month of being on the AIP diet.  Here's my experience of what went well and what didn't -- you know, for science. 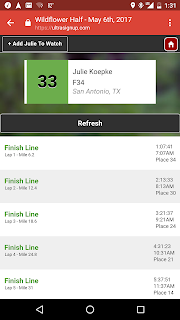 
Posted by Julie Schmal at 8:07 PM No comments: