The second annual Ice Cream Challenge dawned bleak and humid.  To the surprise of everyone, Matt “The Assassin” Smith was the first to arrive at the starting line.  He even brought his own spoon, for some reason.  The other competitors trickled in prior to the 10:00am race start . . . except for the Spleens, who maintain their own schedule.

In a repeat from last year, “Sweet” Chris had his entire Chipwich in his mouth immediately after the starting gun.  Fellow competitors and spectators looked on in awe, having only taken a bite of their own Chipwiches, as Chris took off on his first lap.  Tom was next to leave, followed by Mike “The Ringer,” Matt and Jason, and the rest.

It quickly became obvious that Matt would dominate the race the entire way.  He was first to arrive at the start/finish, with a 10:40 loop one (1.7 miles).  Next in was Blaine “Grizzly” Adams, followed by “The” Steffan, who also made up time on the run.  As the competitors ate their second novelty treat, a Klondike Bar, Steffan made the first of many complaints that his “teef hurt.” 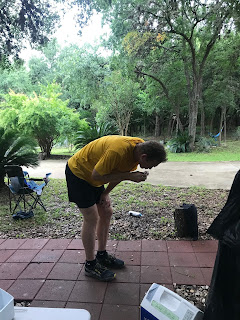 The third novelty treat was a Drumstick.  By this lap, it was already a race for second, as Matt arrived in 22:40, and took off for his third loop in less than 3 minutes, long before another competitor was even in sight.  Second place at this point was Blaine, followed by Joe, then Tom, with Chris hot on his heels. 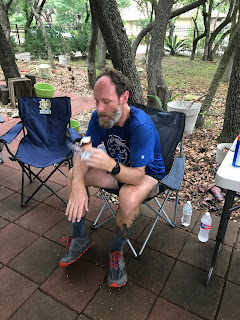 The first to finish was Tanya, the smartest one of the group, having signed up for JV, which ended after three loops.  When asked why she didn’t upgrade to Varsity, she responded with a litany of reasons, each of which were very good, such as having just completed Miwok 100k two weeks ago.  However, she was miffed upon hearing that Jason (who also did Miwok) was dropping down to JV as well, calling his decision “ridiculous.”  Unfortunately, since he dropped mid-race, this earned him a DNF.

Runners slowed down in the fourth and fifth loops – Snickers and Popsicle.  That is, except for Matt, who proclaimed, “The ice cream still tastes good” while eating his Snickers treat, and took off just as fast as ever.  While Chris’s running had slowed down (he was heard to complain that “This course has too much running”), he was just as fast in eating as he was at the start of the race.  Steffan captured the overwhelming feeling of the spectators with his one comment about Chris’s instantaneous consumption of his Snickers bar: “Oh shit!”

Around this time, Matt came in for his final challenge: the lap 6 pint of ice cream.  He had the easy confidence of a winner, remarking, “This [pint] is going down easier than I thought.”  It was around this time, too, that he declared his decision to take on the Triple Crown: having won the beer mile and now the ice cream challenge, he was now throwing his hat into the Whataburger Challenge ring well in advance.  Taking off on his last loop, he would ultimately lap every competitor except for Tom, and finish with a new course record of 1:18:26, decimating last year’s CR of 1:37.  His victory speech: “This is the biggest day of my life.” 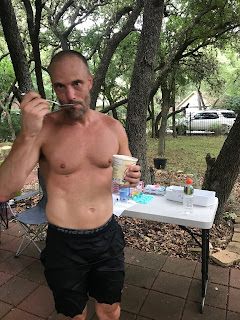 As runners ate their 5th treat, a Popsicle, they were asked for their pint flavor request, as there was only one of each flavor.  Chris asked for mint chocolate chip and then took off on his 5th lap.  Steffan was then asked for his flavor.  He also asked for mint chocolate chip.  When told that he’d have to beat Chris back in order to nab this flavor, Steffan got a determined look in his eye, and proceeded to outrun Chris by a good margin.  He had already started into his minty ice cream when Chris arrived and was told, to his chagrin, that mint was taken.  With an intensity driven by resentment, Chris plowed through his pint of chocolate chip and took off for his final lap before Steffan was halfway done with his.  On the way out, Chris muttered to Steffan, “That’s for eating my mint.” 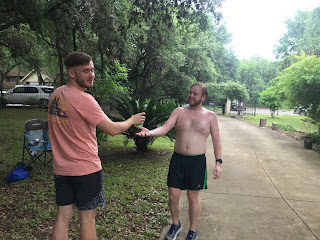 Daniel handing Steffan his mint ice cream. The smile wouldn't last.
Despite arriving second after loop 5, Schmo left in fourth place after eating the pint, with Tom and Blaine severely outperforming his ice cream intake.  Tom would maintain his lead for 2nd place, but Schmo passed Blaine during loop 6 to take 3rd.  Blaine had the honor of “Biggest Bonk” for the race, slowing down to a crawl at the end.  He professed that “The sugar doesn’t bother me.  I’m just tired from running.”  As Tom finished, he noted, “5 minutes faster than last year.  That was my ‘A’ game.”  His wife Michele could be seen beaming with pride near the finish line. 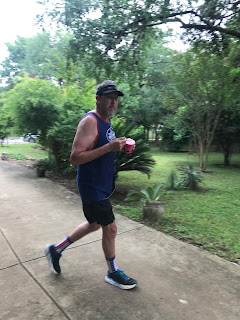 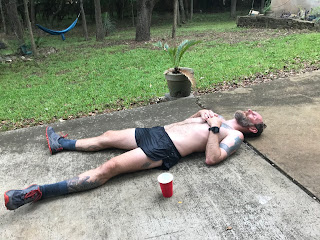 Poor Chris was having a bad day in general.  He complained about his legs hurting, being undertrained, not getting his preferred ice cream flavor.  And yet, he was happy with his finish, since he beat his arch nemesis Steffan.  His first words after crossing the finish line were, “Well, I beat Steffan.  That’s all that matters.”

Mike came in next, for 7th place.  At one point during the race he lamented that he really has not been running lately.  Unfortunately, there was 10 miles of running, and Mike was not able to get redemption from last year’s 4th-place finish.  Bryan “Lacy’s Husband” finished despite a pounding headache, which he attributed to eating so much dairy, and earned the coveted DFL. 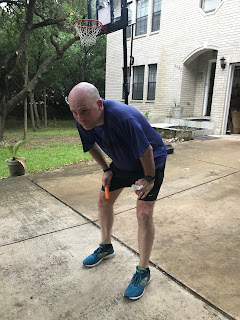 Bryan fought hard all day
Next in the eat-and-run series will be the 4th annual Whataburger Challenge, on Labor Day.  Stay tuned to see whether Matt can pull off the unprecedented Triple Crown. 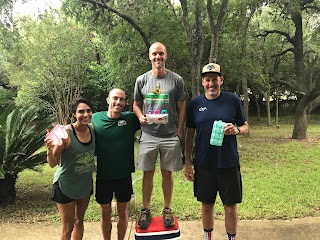 Posted by Julie Schmal at 6:01 PM No comments: