My friends Asma and Matt and I flew into Phoenix Thursday morning and then drove up to the South Rim of the Grand Canyon.  After spending Thursday afternoon sliding down and slogging back up a couple miles of the Bright Angel trail on the South Rim of the Grand Canyon, and doing the same Friday morning on the South Kaibab trail,we traveled north and east to the Arizona/Utah border for the Monument Valley 50 mile race.
Friday, March 13 -- Packet Pick-up and Trail Briefing

At packet pickup, RD Matt Gunn gave a brief description of the course and then introduced the first of 3 Navajo who would speak with us.  As they talked, we got to enjoy the beauty of the monuments in silhouette as the sun set.  Tanya and Jason had joked that they only attended the race briefing in order to find out the starting time of the race; I was mostly hoping to learn the distance between aid stations.  After the final speaker, a young lady soon to compete in the Miss Indian World 2015 pageant, I realized I wasn't going to find out what I wanted.  The RD didn't say anything more, and the runners looked at each other as we realized the briefing had abruptly ended and that was it.  Another runner turned to me and asked, "What time does the race start?"  I told him 7am, and we verified that we had the right time, as the Navajo Nation observes Daylight Savings Time, so our watches had to be changed from Arizona time.

All joking aside, I really did like the casual, relaxed tone set by the RD, his respect and gratitude for the Navajo people who allowed us to run on their land, and his emphasis that running here is not about a race so much as "an intrinsic way to absorb the landscape."
Saturday, March 14 -- 50 Mile Race
Disclaimer: I have a really bad memory, and I'm just recording the miles between aid stations as I recall them, so I might be off a bit.

Miles 0-3.5 (To Sentinel Mesa A/S)
After a Navajo blessing, facing east toward the rising sun, we headed out in the darkness, north toward Sentinel Mesa.  After the sun rose, I was so astounded by the beauty of the monuments to my right that I stopped to take the first of many pictures.  Most of the course is off limits to non-Navajos, so it was such a privilege and blessing to get to see the views we ran through.  This stretch included a sand dune that was really fun to run down.  I was surprised at how many runners went without gaiters, despite the RD's recommendation to wear them.  After coming off that first sand dune, I saw some folks dumping large quantities of reddish sand from their shoes.  It would be frustrating to deal with that all day.

Miles 3.5-9.5 (To Brigham's Tomb A/S)
These first stretches of the course were singletrack trail, and the terrain was sand that ranged from firmer to looser, but was runnable.  The way to Brigham's Tomb led us past Stagecoach Butte, which was very scenic.  It already started to feel warm by this time, and I'd taken off my light jacket and arm warmers.  To get to the aid station itself, we passed some horses and a cute dog owned by the Navajo who live here.

Miles 9.5-15 (To East Mitten A/S)
In my mind, I keep conflating the Brigham's Tomb stretch with the East Mitten stretch, but I believe this was the part that featured some winding singletrack between boulders.  The RD was at the East Mitten A/S, and he made a comment like, "Is it heating up out there already?" as I poured water over my head.  It actually didn't get too hot, temperature-wise -- I don't think it even got over 70, but I guess I'm really not acclimated to heat after this chilly winter, because out in that sun with no shade to speak of, I felt the need to pour cool water on myself at every aid station I hit, except the first 2 and the last one, when the sun was getting low in the sky again.

Miles 15-22 (To Hogan A/S, 1st time)
This was probably my least favorite section of the course, although it was still absolutely picturesque and a blessing to run through.  It was just less fun to run through a wash than to run on singletrack.  One benefit was that occasionally some standing water would be in the creekbed, and every time I'd dip my buff into it to cool my neck.  The final part of this section, leading to the aid station, involved running up an unpaved road with frequent passing tour vehicles, each of which kicked up a wall of sand and dust that made me very thankful for my sunglasses and buff.  The hogan, or traditional dwelling, at this aid station is owned by a Navajo family who made mutton stew for the runners.  I didn't check that out, but only hit up my drop bag and grabbed more gels, as well as sunscreen and water.  I gulped down some Tailwind as well, each time I came back to this A/S.

Miles 22-27 (North Window loop, to Hogan A/S, 2nd time)
Matt Gunn said they call this the Marlboro trail, because it looks like scenery from the cigarette ads.  Every step of this loop offered 360 degree panoramic views.  As we passed by Rain God Mesa, I glimpsed a roadrunner, which reminded me of San Antonio.
Miles 27-37 (Arches loop, to Hogan A/S, 3rd time)
This big loop started off on another unpaved road with vehicles kicking up dust in our faces.  I also experienced two dust devil-type situations, which was kind of interesting and fun.  There were a ton of photo-worthy features on this stretch: The Thumb, Totem Pole, a huge sand dune, Big Hogan, Ear of the Wind, and Sun's Eye to name a few.  Some of this was singletrack, but a good part of it was on a wider path, like an old Jeep road, which led us around an area that looked like it may have been part of the uranium mining operations or other activities that once took place on this land.  I could be totally wrong about that, however. 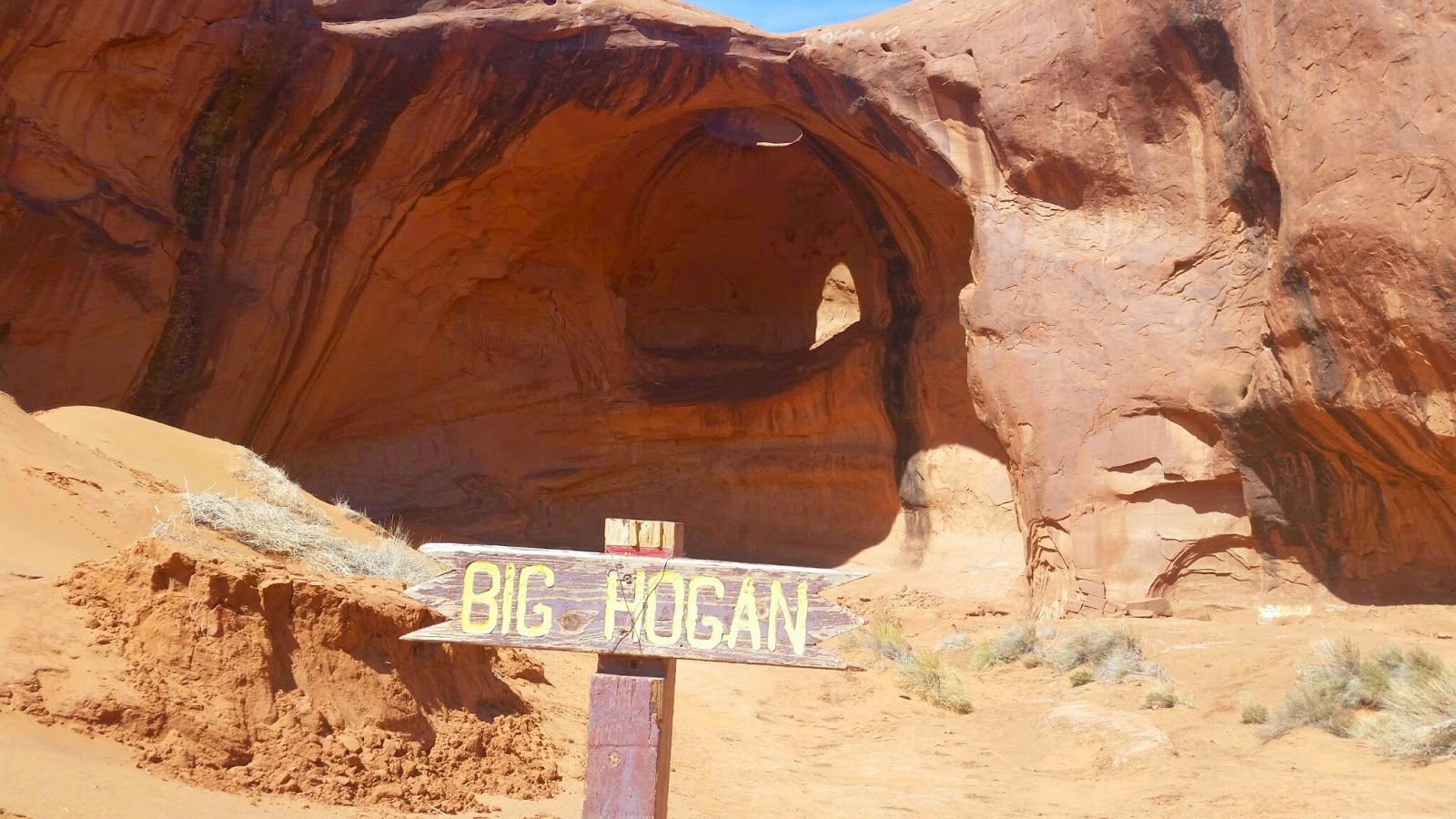 Miles 37-46.5 (Mitchell Mesa out and back, to Hogan A/S, 4th time)
I left for this out and back having no conception of how many miles it was.  There was a whiteboard at each aid station that said how far until the next aid station, but the one at Hogan, being the epicenter of so many different loops for different distances (100M, 50M, 50k, 25k), had way too much info for my tired brain at this point.  So I headed out with a pretty full bladder in my pack and plenty of gels.  I knew this would be a challenging bit, because we had to climb to the top of Mitchell Mesa, which looked like an impossible feat from the ground below.  It was an ascent of about 1,000 feet, coming at around mile 40 of the 50-mile race.  Okay, it's nothing compared to the Georgia Death Race ;), but between the altitude, the heat, and my current lack of fitness, I felt it -- my heart rate during the entire race was higher than Dr. Maffetone would recommend, and especially going up this steep climb.  But the views were breathtaking, and the echo when I yelled at the top beat even the echoes at Santa Elena Canyon in Big Bend.  After an equally steep return down the mesa, I did some calculations and realized that I needed to shift to another gear if I was going to finish sub-12 hours, which was my only major time goal for this race.  So I started pushing my pace and ran my fastest few miles back to the hogan. 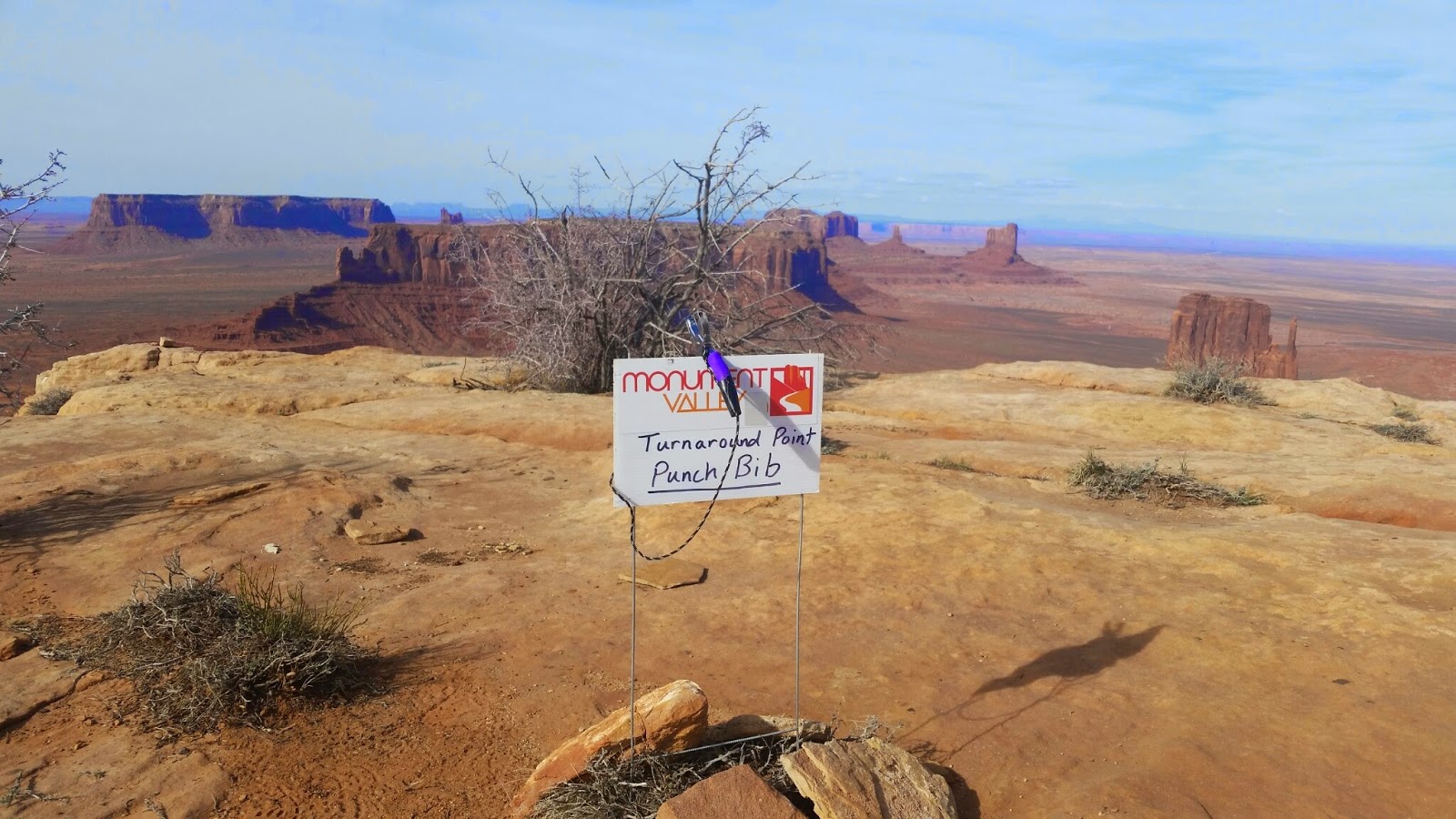 Miles 46.5-50 (to Finish)
This 3.5-mile run on the "shoulder" of the unpaved road was not super enjoyable.  As the RD had warned us, it had just been graded, so the loose sand and dust continued to find its way into eyes, mouth, nose, etc. every time a car passed (which was frequently).  I could see The View hotel, near the start/finish, from a few miles away, and it never really seemed to look any closer every time I looked up at it.  There was a nice big hill up to the finish, which made the feeling of accomplishment when I came in that much better.  I was happy to see my friends and pick up a finisher's bracelet, handmade by a Navajo artist from leather and horsehair.  I enjoyed my freshly made Navajo taco as a recovery meal.  Then it was back to Goulding's Lodge for a shower, Navajo tea, and good conversation.  I was so tired that I couldn't even make use of the cassette tape/stereo built into the wall of our 3-bedroom unit for a celebratory dance party.  Maybe next time.


Posted by Julie Schmal at 9:00 AM No comments:

Posted by Julie Schmal at 4:59 PM No comments: