This weekend I raced the Captain Karl's 60K (37.3 miles) at Pedernales Falls State Park.  I have to say that I didn't have as much fun during the run as I normally do.  Maybe it was the heat (about 90 degrees at the start), the sleep deprivation (I finished at 2:24 in the morning), or the 14-gel-pack-induced nausea, but I really had to dig deep to continue pushing on.  Here's a little recap of the highs and lows:

As the gaggle of runners took off from the start, I said my traditional "Saint Sebastian, pray for us!" and began at a jog.  I'm fine with starting off toward the back of the pack, because I've made that dreaded mistake before, of going out too fast, and paying the price later.  During the first loop of 18+ miles, I ran very conservatively, trying to keep my heart rate down in the heat and save my energy for the long night ahead.

One of my favorite times during a race is when the pack breaks up and I'm left running by myself, at my own pace.  I'd say that happened somewhere after the second aid station.  It was nice to enjoy the beautiful views in the park in the few hours before the sun went down.  The trail was marked very well -- as Tejas Trails races always are, in my experience -- so even someone as geographically-challenged as me couldn't get lost.

I couldn't believe it when the first loop was done and I found myself back at the start/finish.  I had thought I was approaching just another aid station -- I didn't realize how far I'd run.  I don't wear a GPS watch or use a smartphone app during ultras, because I really prefer not to know -- it usually helps the miles fly by faster.  If I wore a Garmin, I would be constantly looking at it and then thinking, "Really? I've only run .4 miles since I last looked?"

After this pleasant surprise, I felt good starting my second loop.  I finished up my fourth Rosary and Divine Mercy Chaplet and switched on my iPod Shuffle.  Listening to music usually helps pass the time and keep me energized and moving, and to be honest, during a trail ultra, I'm far enough out of anyone's listening radius that I feel perfectly comfortable singing along to my tunes.  However, this time it just wasn't enough to make my running enjoyable.  I took some candied ginger a friend had given me, in an attempt to combat my nausea, and despite the terrible taste, I think it did help.  Another thing that helped was the quite-appropriate lyrics to my songs, including:

"This looks like more than I can do -- on my own. . . . When I've finally hit rock bottom, that's when I start looking up and reaching out . . . Lord right now I'm asking you to be strong enough for both of us." -- Matthew West, "Strong Enough"

"You lead, I'll follow . . . just light the way and I'll go." -- Jamie Grace, "You Lead" (Especially appropriate since I was using a headlamp, a flashlight, and the almost-Super Moon to find my way along the trail in the darkness.) 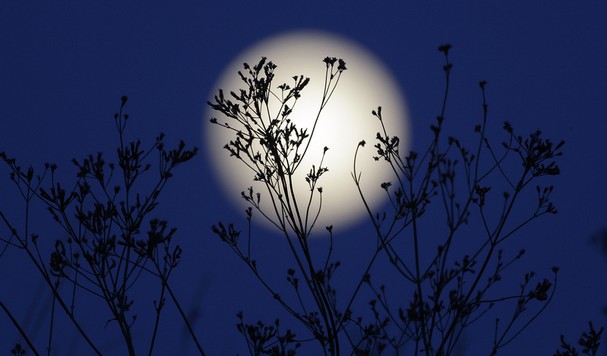 At the last manned aid station, I asked the volunteers if there were many girls ahead of me.  Their response was "no."  I guess my question was too vague; as I ran away down the trail I found myself wondering, "Does that mean there are 4 or 5 in front of me? None in front of me?" I had no idea.  At least I had an idea of how many miles remained: the volunteers had told me "a little over 6."

Those 6+ miles turned out to be the longest ever!  I had to pause my music and say another Rosary.  That helped re-focus me a bit.  The other thoughts that helped me keep my perspective were dedicating my run to certain loved ones and remembering that I was wearing a Life Runners singlet and running for a culture of life.

With maybe 3 miles remaining, I had to force-feed myself some more Gu.  I did a pretty good job of taking a gel pack every half hour, in order to have enough energy to keep my pace up.  But that stuff is pretty darn disgusting.  And with a queasy stomach from all the jostling and bouncing of a long run, it's especially unpleasant to squeeze 4 ounces of berry-flavored gelatinous goo into your mouth.  My last-ditch attempt at keeping my spirits up was singing aloud to my new favorites, "I Love It" and "Cruise," while constantly pleading for the assistance of St. Sebastian.  I wanted to just stop and walk so many times, but I also wanted to finish well and take home one of the fun trophies Tejas Trails races always have, so I pushed myself to keep going.

Words can't express how happy I was to reach the finish line.  After verifying that my time was recorded (the ankle bracelet holding my chip fell off a couple times during the run, and I was paranoid that a vital component had become dislodged), getting a medal and a few much-needed hugs, I was happy to take home my little award for 2nd place female, change in the port-o-potty, and head back to San Antonio -- successfully pulling my first all-nighter since college.  Arriving home at 5am, I had just enough time to change clothes and head to 6:00 Mass.  I have to say that gazing at Jesus up on the crucifix behind the altar really put into perspective any little suffering I had during the night.  It also reminded me that through suffering comes triumph.