Last February and March, the knee pain I struggled with seemed like such a terrible blow, making for very painful runs and then keeping me from running entirely for a month.  I went through the usual injured runner's stages of grief, and it sucked.  Blah blah blah.

But now, as 2015 comes to a close, I can see that that knee injury, although seemingly entirely a bad thing at the time, was in hindsight a blessing -- as so often turns out to be the case.  The reason I see it as a blessing now, is because it led me to my excellent Airrosti doc, Nick, who led me to an excellent gym, where I have been going consistently for about 10 months now.  That has helped me be a stronger, more efficient runner, and it shows: in 2015 I was able to PR at the 60k, 50M, and 100M distances, and won 3 more races than I did in 2014.  Again, none of this is my doing -- it's only by the grace of God that one thing led to another, and things have turned out so well.

So here I am in December of 2015, struggling with the same knee pain as I did at the beginning of the year.  And you could say, Hmm, maybe doing 14 races a year isn't the best for your body?  And like a jerk, I'd say: 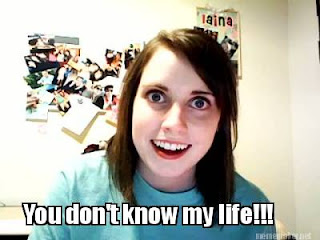 Anyway, my reflection on the course of this year gives me hope that this iteration of injury, as well, will turn out to have a beautiful silver lining.  Time will tell.
Posted by Julie Schmal at 5:30 PM