The night before the race, I wrote in my journal that I was feeling a combination of anxious/nervous/scared.  To quote my journal entry, "I just have no idea what to expect from the trails, how I'll feel, when I'll finish, anything!"  I have never run a mountain race before, I was up against mostly local runners who presumably have some experience on the course, and I'd gotten dire warnings about the intense toughness of the course from my friend Chris, who had run the 50k before: 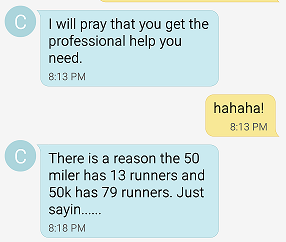 But then I revisited my journal entry from the night before Rocky Raccoon 100M, where I had written a prayer I heard from my pastor back home in Minnesota, Fr. Richard: "God, you're here with me now.  You'll be with me then.  So I let go."

After praying this, I felt my stress level immediately go down.  I released any pretense of control and just relaxed, realizing everything was in God's hands.  Even during the race, I repeated the prayer to myself, when I'd feel myself starting to worry over what place I was in, how I was feeling, etc.  After I finished, as people asked how my race was, all I could think to say was, "It was fun!"  And that was the truth.  Thanks to my new-found relaxed attitude, I just really enjoyed the day.  I never really had any low spots, and I smiled a lot.  The end. . . . unless you want the longer version:

I arrived in Phoenix the afternoon before the race, picked up my rental, and drove to White Tank Mountain Regional Park.  My rental car was my hotel room for the night, and it provided 8 hours of sleep . . . although I woke up once every hour to attempt to find a more comfortable position.  (Never happened.)

Wise words from my friend Edward gave me some encouragement: 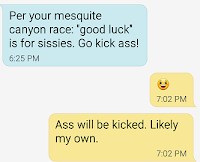 In the morning, I spotted Jamil Coury (fangirl!), set out my drop bags, and admired the laid-back atmosphere of Aravaipa's races.  No runners approached the start line until literally 5 minutes before race time, when the race coordinator made some announcements about the course markings.  And then we were off!  I set out on my "All Day" pace, since that's how long we'd be out.  I never let myself think of it as a race until at least halfway through -- for better or worse, that's my strategy.

The 50-mile race was two loops: the first loop followed the 50k course, and the second loop followed the 30k course.  During the first loop, I toggled between 3rd, 4th, and 2nd place.  Although I loved the beautiful desert views -- mountains, saguaro, flowering cacti -- I kept my focus on my right foot, which I re-injured last week at the Pandora's 52M race, making sure to not take any bad steps and roll it again.  Coming into the start/finish at the end of loop 1, the 1st female, Jen, passed me heading out on her second loop.  I judged that she was about 2 miles ahead of me.

Loop 2: Pulling out all the Stops

The second loop, for me, means the race has really started.  So I gave up my "All Day" pace and switched to a push.  I also pulled out all my tricks:

Owing to the beautiful, mid-70s weather, tons of hikers were out and about on the trails.  They were all very kind to move aside for the racers and offer encouraging words.  I entertained a small group of them when I (for about the 6th time that day) tripped and stubbed my right toes against a rock.  They emitted a collective gasp, but I just kept running and called back to them, "It happens!" which seemed to amuse them very much.

The one not-pleasant interaction with a hiker came on my 3rd journey up Goat Climb, a tough ascent.  I was laboring up the climb, hands on knees, when a leisurely hiker coming down told me, "At the rate you're going, you won't get anywhere for hours!"  Me externally: "That's cruel." *good-natured chuckle*  Me internally: Thanks, a-hole.

I did that thing I do, where I don't want to stop to pee, because it's a race and all, so I hold it for 30 miles.  Does anyone else do this?  It can't be good for me, I know.  My Garmin read 33.25 miles when I finally stopped to go.  I wonder what the record is for holding it.

When I picked up my headlight around 3pm (just in case I didn't make it to the finish line before dark), it was already turned on.  It had probably been on ALL DAY.  Dang it.  I could hear Edward's voice in my head: "WTF, Julie, learn how to use your damn headlamp!"  Sorry, Edward!  Please sign me up for your next headlamp class.  At least that was good motivation to hurry up and finish before dark.

Iron Stomach for the Win

I usually bring my own nutrition to races, but since packing space was limited, I relied on aid stations for most of my nutrition this time.  Coming into the Bajada aid station on loop 2, I said, "You guys had the best bean burritos last time."  The volunteer responded, "The secret is, it's from a can.  And we take it out and let it breathe for four hours in the hot desert sun."  I said, "You could tell me anything, and I'll still eat it."

Unsurprisingly, my 2nd bean burrito made my tummy hurt.

Surprisingly, my 3rd bean burrito made me feel great.

PS: That 3rd bean burrito fell on the ground, but I still ate it.  Now with minerals!

All 3 bean burritos were somewhere in my digestive tract when I passed Jen, who had stopped to puke.  I felt almost ashamed of my careless burrito ingestion when she was unable to tolerate anything at all.  I offered her ginger chews and Tums, but she said she just needed to stop for a bit.  After I passed her, I really put on the gas, not wanting to relinquish the lead and never knowing just how far back Jen was, and if she was feeling better.  Sadly, at the finish line I learned that she had to pretty much walk it in from that point, which was about 10 miles from the end.  She was so determined and strong to keep going!

This was honestly the first race in my life where I've been a little disappointed to see the finish line.  It was just such a fun day, I was sad to see it come to an end.  But how cool to see friends at the finish line, when you feel like you're in a foreign land and don't know anyone!  I saw Dave James, who I met at Team RWB Trail Camp, and who is now working at Aravaipa.  And I met Ana, a Rockhopper who hangs out with Tanya and Jason.  It was great talking with Dave and Amy, and Ana and her family, as well as Jen and her friends.  The wood-fired pizza and beer were nice touches, too.